Batchelder: Tax The Rich And Their Heirs

A massive transfer of wealth is underway and will accelerate in the coming years. Baby boomers and the generation that preceded them currently own $84 trillion, or 81 percent of all U.S. household wealth — wealth that will before long be inherited by their children and other beneficiaries.

This extraordinary transfer of resources will further cement the economic inequality that plagues the United States because this wealth is tightly concentrated in the hands of a few. And it will be passed on as taxes on such transfers are at historic lows.

Among high-income countries, the United States has one of the lowest levels of intergenerational economic mobility, meaning a child’s economic future is heavily influenced by his or her parents’ income. We have the second-highest level of income inequality after taxes and government transfers, and the highest level of wealth inequality. These disparities are sharply skewed by race. Median black household wealth is only 9 percent that of white households, a racial wealth gap that is even larger than in 1968. New research suggests the pandemic will further increase wealth inequality, as the affluent save more and the poor earn less.

Effectively addressing these systemic inequalities will require many things. But increasing the taxation of inheritances is one vital component. ...

We know how to tax inheritances more fairly. We need to act before the massive wealth transfers on the horizon further entrench a hereditary economic elite. 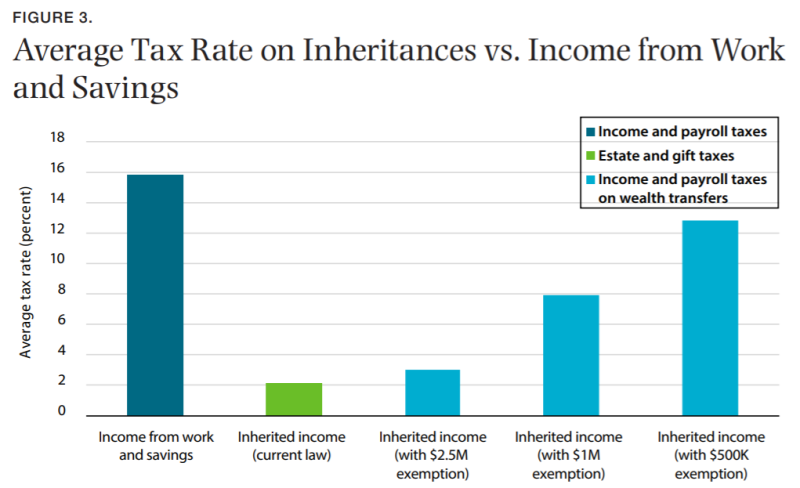 Maybe there is a correlation between IQ and race?

Maybe the reason rich parents end up with rich kids is not explained as much by taxes, but rather IQ?

Since when is wealth inequality a bad thing? Most don’t buy the marxist claptrap.

Perhaps we should look at the tax exemption for wealthy universities before raising taxes on the middle class?

Mike Livingston: "Tax the Rich and Their Heirs" doesn't sound to me like a tax on the middle class. Her proposal expressly says that the tax would fall only on those receiving the largest inheritances.

Wealth inequality does not stem from IQ; it stems from policies that have privileged existing wealth for literally hundreds of years, including slavery, Jim Crow, and many income and estate tax policies, from lax taxation of capital gains, to 199A, tax-free reorg provisions, and ridiculously high exemptions and low tax rates on estates.

Gerald: You're really not having a good week, huh? Not sure why you quoted someone else in order to put words in my mouth.

P.S. I am opposed to Marxists claptrap, by the way, Not on this topic, but on BLM. The national organization admits quite openly that it's founded on Marxist principles, in addition to a rejection of the concept of a colorblind society.

P.P.S. Would you like to explain the recent spike in coronavirus cases, three weeks out from mass protests that YOU were applauding and supporting here at this blog?