ABA: Law Schools That Fail Two-Year 75% Bar Passage Standard Will Not Lose Accreditation If A Subsequent Class Meets The Standard

Following up on my recent post, ABA: Ten Law Schools Are Out Of Compliance With 75% Bar Passage Accreditation Requirement:  ABA Journal, Revised Bar Pass Standard May Be Less Absolute Than Some Thought: 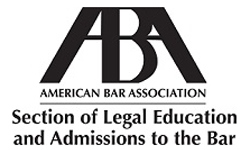 When the ABA in May released public notice that 10 law schools were out of compliance with a recently tightened up bar pass standard, there was some surprise as to which school didn’t make the list.

Revised in May 2019 amid much criticism, Standard 316 requires a two-year pass rate of at least 75%. Shortly after the new version was put into place by the council of the ABA’s Section of Legal Education and Admissions to the Bar, the section published a guidance memo stating that compliance would be based on 2017 graduates.

Despite that clear standard, it seems to be less rigid than some feared. For instance, Faulkner University’s Thomas Goode Jones School of Law, with a 62.5% pass rate for 2017 graduates, was not sanctioned by the council last month. According to a May 20 council decision Charles B. Campbell, the dean of Faulkner Law, shared with the ABA Journal, the school demonstrated compliance by showing that its class of 2019 bar passage rate will not fall below 79%, and its interim ultimate bar pass rate for its class of 2018 is 75.6%.

Bill Adams, managing director of ABA accreditation and legal education, confirmed for the ABA Journal that law schools with bar pass rates below 75% for 2017 graduates can demonstrate compliance if they have locked-in pass rates at or above 75% for 2018 or 2019 graduates.

Looking at subsequent bar passage rates rather than a single focus on a prior year is a sensible and fair approach to determining Standard 316 compliance, say some academics.

“I think you want the schools to be able to show they made some improvements,” says Derek Muller, a professor at Pepperdine University School of Law, who also writes at Excess of Democracy.