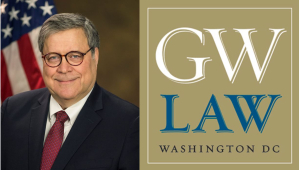 In a statement released today [Statement Regarding Attorney General William H. Barr From Members of the George Washington University Law School Faculty], on the eve of an oversight hearing on the Attorney General and the Department of Justice in the Judiciary Committee of the House of Representatives, 65 current and emeriti faculty members of George Washington University Law School condemned the actions of Attorney General William P. Barr and called for him to resign his office. The statement is a highly unusual rebuke of a leading alumnus. Barr received his J.D. from the law school in 1977, served on its Board of Advisors, and has been honored by the law school and the university. The letter is signed by over 80% of the active full-time faculty with voting privileges, joined by 18 emeritus professors, deans, and legal professionals. The signers of the non-partisan statement include members of both major political parties, and of none.

The GWU Law statement endorses recommendations made by approximately 2,500 alumni of the Department of Justice, who served under both Republican and Democratic administrations. In addition to calling for Attorney General Barr’s immediate resignation, the DOJ alumni and the GWU Law faculty request that Congress exercise its authority to review Mr. Barr’s conduct in office and censure him and that the Inspector General of the Department of Justice initiate a formal inquiry into his conduct.

The GWU Law faculty members cite multiple instances of Mr. Barr’s conduct as evidence that he has “failed to fulfill his oath of office to ‘support and defend the Constitution of the United States.’” These instances include:

The lead authors of the statement note that Attorney General Barr’s pattern of breaches now extends to an attempted late night dismissal of Geoffrey S. Berman, the U.S. Attorney in Manhattan, and his subsequent firing in what created an appearance of intended interference with politically sensitive investigations involving the President and cronies.

That means 20 percent had the courage to say no. At a place like GW, that is a moral victory

Have these same faculty made any kind of statement about the decapitation of their namesake's statue?

Is their silence consent?

Just like the Hollywood elite, naught but useful idiots.

I love the self importance of faculty, especially law faculty. I'm no great fan of Bill Barr, but why would anyone care -- and I mean anyone, including spouses and children of faculty -- what law faculty think of such matters? The academic importance bubble is over guys.

Early today I noted that university faculty will get no significant support in their battles with university administrators. This 80% number indicates why. All we need to is contrast these alleged and openly done abuses of Barr with the incredible abuses of government power in the effort to unseat Trump, efforts that Deep State Target only begin to touch on.

We're these people in a coma during the Obama years or were they high on hopium the entire time?

Are they doing this in the wrong order? First rebuke George Washington, tear down all his statues, and change the name of the university. Later backstab alumuni.