It will come as no surprise to most Americans that academia has been lost largely to the Left. To put this in perspective, college professors donate to Democratic candidates over Republican ones by a ratio of 95-1, Yet, there are notable holdouts in the academic world, among them the aptly named Antonin Scalia Law School at George Mason University, just outside Washington, D.C.

As one may guess from its namesake, Scalia Law is well known for its libertarian and conservative professoriate and for its resistance to unyielding pressure to change that outlook. Unfortunately, all of this is now under assault by a group of students themselves. 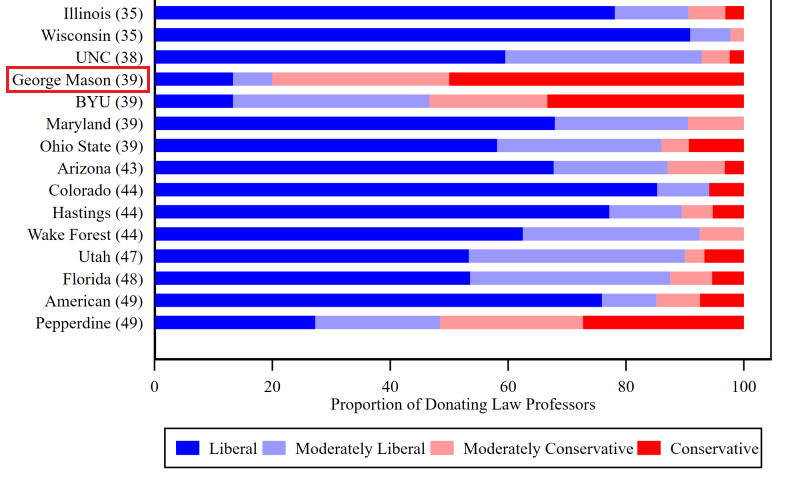 This week, Scalia Law’s Student Bar Association (SBA), in contravention of its supposed non-partisanship, issued a letter to the school’s administration, copying the entire student body, which contained a set of radical, Black Lives Matter-esque demands. The letter demanded, among other things, full tuition scholarships for all black students, affirmative action programs, special funding for “diverse” clubs to bring speakers of “intersectional identities”, and mandatory “race equity” trainings for all faculty, staff, and students. ...

Scalia Law is not new to these sort of demands or controversies. Last year, some students from George Mason University demanded that the law school terminate its relationship with Justice Kavanaugh, and years before, students protested the naming of the school after Justice Scalia. Thankfully, on both of those occasions, the administration reminded the students that the Dean and the faculty run the Law School and did not cave to temper tantrums from radical elements of the student body. We can only hope that the administration keeps its resolve now, and refuses to bow to the mob.

The student does claim that the Federalist Society simply had no idea that this letter was coming — which others dispute — but then blows any political capital this exclusion might have carried when he doesn’t suggest that the group would’ve signed on if given an opportunity. Rather, he bemoans that FedSoc wasn’t given an opportunity to gut the letter to the point of meaninglessness, which is certainly a kind of cooperative effort. But this gripe gets to the heart of the whole conservative complaint about race and diversity. If white people aren’t at the center of everything, the snowflake alarms go off at FedSoc headquarters. It’s discriminating based on race to recruit students for not being white, while it’s not discriminating when Black students get harassed at the library… for not being white. Here, students are allowed to have opinions… as long as the white people get to edit them for content.

Yes, students often make demands, and too often schools yield to them. Probably one reason is that faculty are reluctant to openly oppose them by presenting arguments against giving in.

Perhaps faculty at the Antonin Scalia Law School will speak out, as I did, when students made outrageous demands on my University, George Washington.

In summary, a small band of GWU students, upset by Trump’s election, created a long list of completely irrational demands, including protection from various things which allegedly upset them.

While many campuses have taken such demands seriously, mine didn’t - perhaps because I went on the offensive on TV, in the media, and on the Internet to ridicule them.

HERE’S A LONGER PIECE FOR [ONLY] THOSE WHO MIGHT WANT MORE INFORMATION AND BACKGROUND:

In what may be an encouraging sign, administrators at George Washington University [GWU] did not yield to a single one of the so-called "demands" made by a coalition of more than a dozen student groups.

Indeed, rather than doing what so many other universities have done in similar situations - grant a few requests, negotiate with the student activists, hold campus-wide meetings, form study committees, etc., - GWU simply ignored the demands and the letter containing them; as did the overwhelming majority of GWU students, the official student newspaper, the student government, etc.

In other words, holding it all up to ridicule seemingly worked.

Maybe it took such outrageous demands - e.g., that GWU take students’ tuition money and divert it to fund off-campus projects having nothing to do with higher education such as job training, community centers, and facilities for the homeless - to finally cause a change in the campus climates over the past several years which have led to university presidents, deans, and faculty having to resign, the establishment of new and expensive programs of dubious educational value, changes in the names of buildings and even symbols, etc.

Perhaps even more important was the bizarre and totally irrational basis for these demands.

The students' so-called argument or justification is that having GWU police provide security on campus is an "act of violence" because police in general have been favorable to Donald Trump; "placing us in these officers’ care is an act of violence," the students opined.

Given the total lack of any validity or rationality to their argument - which also demanded, for some unexplained reason, that the university recognize "white supremacy” - it seems like they are behaving more like inmates in an asylum seeking to take it over than as students at a major university making a rational presentation for much needed changes.

Unfortunately, as ridiculous and as illogical as their premise and demands were, similar situations have occurred at other institutions of higher education and their law schools where the bizarre and virtually unbelievable claims of their students were taken seriously and actually acted upon.

At some law schools, students claimed to be so traumatized by Trump's election that they could no longer function. The schools responded by cancelling classes and postponing exams.

At one top law school, Michigan, its "embedded psychologist" offered the law students Legos, play dough, and bubbles to help them cope with the alleged "trauma" of Trump's election.

Some schools did the same when students claimed to be traumatized by the shooting hundreds of miles away in Ferguson.

The response to this new letter to GWU, with the new demands, was that virtually everyone - the University, the student newspaper, the student government, etc, - simply ignored it.

The only ones who didn't ignore it were the media, who excoriated the students for the total irrationality of the rationale for the demands, and for the very demands themselves.

One called it one of "Three of the Most Absurd Campus Reactions to Trump’s Win," saying: "In one of the GWU students’ most bizarre demands, they called on the university to ‘protect its students’ by not forcing them, in an ‘act of violence,’ to remain under the protection of campus police."

Let’s see what the Antonin Scalia Law School faculty do.

In the Hunger Games, President Snow uses the term "radical" to discredit those who oppose his rule. Is it really "radical" to believe that people of all races should be treated equally?

Makes sense. In a free society, conservatives and libertarians don't keep people out of the discussion just because they disagree.

On the other side of the aisle, well, not so much...

I don’t think it’s unusual for students to make “demands,” the school doesn’t have to agree to them

Ted Seto is correct. It is not "radical" to recognize the harm done by 400 years of slavery, Jim Crow, and systemic racism in this country and to question the institutions and policies that have made the continuation of that status quo possible. From rejecting government monuments to Confederate traitors to questioning the maintenance of militarized police forces that protect killers who intentionally snuff out African American lives to removing institutionalized honoring of those whose underlying philosophies rested on white male supremacy--all these are actions that any thinking person in this country should recognize as necessary merely to start to remove the stain of systemic racism and genderism.

It's funny how Democrats are in charge of all the institutions that are supposedly systemically raciss.

I am surprised that I should have to explain fine distinctions and nuances of meaning to a law professor, but apparently I do. So: "treason" versus "secession" versus "rebellion" and "revolution". Please learn the differences between these terms before inflicting your over-wrought, over-emotional word salads upon us again. Thank you.