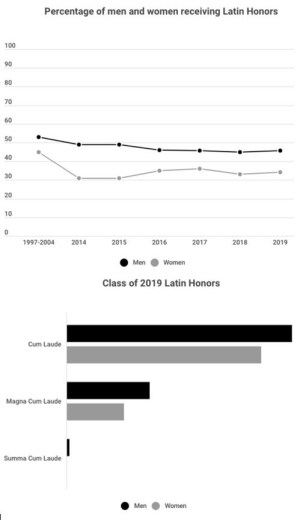 For five consecutive years, the Women’s Law Association (WLA) has published a statistical analysis of Latin Honors and gender at Harvard Law School. For all five years, that study has found a statistically significant difference between the number of men and women graduating with Latin Honors, as compared to the expected numbers based on the gender breakdown of each class.

In stark contrast to the persistent Latin Honors gender gap, the past five years have seen three of HLS’ most prominent by-application student organizations –  Harvard Legal Aid Bureau,  Board of Student Advisors, and Harvard Law Review – achieve gender parity. All three organizations have even had majority female membership at times. This is the kind of progress that we would have hoped to see for Latin Honors disparities. ...

In light of the administration’s failure to investigate the ongoing lack of gender parity at HLS and in celebration of its 50th anniversary, the WLA launched its own study of gender equity and inclusivity at HLS this year. The WLA is conducting the survey to broaden the understanding of the different ways in which people of all genders experience the law school. Given that it has been over fifteen years since a comprehensive study of this kind was conducted, an updated study on the student body is crucial for determining what factors improve or inhibit the success of women at HLS.

But, isn't grading on law school exams anonymous -- the faculty do not know who wrote each exam. So, how could there be sexism in course grading for those law school courses where the exam is the entire grade?

Congratulations, you just played yourself.

Sorry, but a survey recently showed that the editors of all fifteen top law reviews were women. If you spend all of your time looking for discrimination, you are going to find it.