My Daughter, My Hero 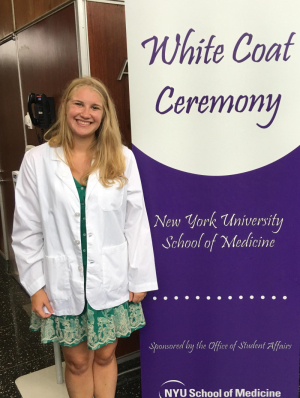 Almost four years ago, my beloved, brilliant, and beautiful daughter Jayne began her medical education at NYU. Her mother and I had planned to be at her graduation in seven weeks, but instead she and her classmates are graduating today in a virtual ceremony due to the coronavirus. We are thrilled that Jayne will be doing her residency near us at Cedars Sinai Medical Center in Los Angeles, a mere 25 miles from Malibu. Yet instead of taking a well-deserved vacation after a grueling four years of medical school, Jayne has volunteered to work at the epicenter of the Covid-19 pandemic at NYU's hospital beginning on Monday.

My late mother would have turned 93 tomorrow. Jayne is named after my sister, who died shortly after birth. My mother was a secretary at a nursing school and absolutely loved the medical profession. Shortly before my mother died in 1992, my pregnant wife and I told her we were going to name our daughter Jayne. My mother would be bursting with pride and gratitude today, tinged with fear for Jayne's safety, just as Jayne's parents and brother are.

Last week, Jayne wrote about her desire to serve in On Being An Almost Doctor During A Pandemic:

Today I found out that I matched to become an obstetrician/gynecologist. On Friday I will discover where I matched. For those in the medical community, “Match Day” is a huge celebration with family, friends, peers and mentors coming to celebrate your accomplishments. You all get together, open your envelopes (sometimes on stage in front of everyone) and cry either happy or sad tears with all of your closest friends and family and the people with whom you have survived four years of medical school. Instead, this year, I will get an e-mail at noon in my apartment alone. I will FaceTime my brother in Madison, WI and my parents in Los Angeles, CA who could no longer come in person to celebrate with me. My brother’s fiancé is on immunosuppressive medications for IBD and has a father going through chemotherapy right now. My parents are over the age of sixty. We all agreed the risk was far too great to be together in person. Quite frankly, I don’t know when I’ll see them again.

In two and a half months I will graduate and become a fully-fledged physician. I don’t know right now if this timeline will be sped up as NYC is depleted of physicians who are not sick themselves or under quarantine and as more and more patients present for care. Part of me yearns to graduate early, to be able to do something instead of stay at home, aimlessly refreshing my phone for virus news, hoping for a glimpse into what is going on inside the halls of the hospitals that have become my home over these past four years, hospitals that I am now no longer allowed to visit because I am not “essential personnel.” I answer texts and questions from family and friends and send along the emails and graphics from my medical institution, calming panic, urging social distancing, trying to stay positive for the other people in my life. And yet, I think, lying in bed, put me in coach, wishing my medical school would send the promised email this morning about what we as medical students could do to help.

I also selfishly wonder if I will get to spend the month at home in California I had planned with my parents before starting the next grueling four years of residency. I mourn the loss of my family reunion in Florida where my boyfriend was going to meet my grandfather (97) and my grandmother (91) for the first time. I worry about the impact of cancelling elective surgeries on my future training as a surgeon. I wonder how I will be able to travel and shop for a new life if I match somewhere not in NYC in the midst of all  these closures. In short, I have selfish concerns.

And then, I go back to, put me in coach. I am on the bench right now and I want to be in the game, doing battle, fighting back. I want to do what I love, which is take care of patients at their most weak, most vulnerable and most afraid. I want to track down outside hospital records with the persistence of a bulldog in the face of a disjointed and inefficient healthcare system. I want to escort patients to their scans because the patient access crew just could not get to them in time. I want to draw blood that a phlebotomist somehow missed. I want to hold someone’s hand and listen to them when the rest of the “real doctors” are too busy. I want to do the job of a medical student for these next three months before I become a real doctor. I want my medical school to realize that we are essential personnel. That we matter. That we want to do something, anything to help too.

Match day is cancelled. Graduation might be cancelled. Selfishly, this pandemic hurt. It is hard not to view this awful timing of a pandemic that has nothing to do with me as a personal repudiation of all of the hard work I have put in to get to this point in my life. Yet, what hurts the most is the inaction and uncertainty. I want to be there for the community that I’ve learned from these past four years. I want to be there for patients. I want coach to put me in. Instead, I wait.

For more on my journey with my amazing daughter, see:

This is such a beautiful story - thank you for sharing. Congratulations to your family, and to Jayne. Sending many prayers your way.

Nothing is better than daughters.

She makes me proud!

I know you are so proud of her Paul! Please congratulate her. We all grieve with her and hold her up in prayer.

Amazing; may she stay safe and save many lives.

Congrats to Jayne on two years of full-tuition scholarship to NYU.