In recent years, law schools have experienced a decline in enrollment and bar passage,and legal education has been challenged to understand this new phenomenon and con-duct research that can inform practices and policies regarding law student success. This article presents ﬁndings from research conducted at the University of Cincinnati College of Law, a large, midwestern public university, which aimed to investigate which factors and student characteristics contribute to bar passage within the home jurisdiction (Ohio). Results suggest bar passage can be predicted by a wide battery of variables, most notably student performance during the law school course of study.

Despite some prior literature that suggests otherwise, however, LSAT and undergraduate GPA were only weakly predictive of ﬁrst-time bar passage among admitted students: the best prelaw model based on student admissions and demographic data identiﬁed just over one-third of the students who ultimately failed the bar on the ﬁrst attempt. Information from the ﬁrst year of law school—even just performance in one ﬁrst semester course—explained signiﬁcantly more variation in bar passage. Furthermore, data from beyond the ﬁrst year of legal study,including upper-level course taking in bar-tested subjects, enriched the predictive power of the model, enabling us to predict 78 percent of students who failed the bar compared to just 58 percent after the ﬁrst year. These preliminary results provide important insights into bar passage, particularly given the increased public scrutiny around incoming student credentials, bar success, and law school performance and accreditation. 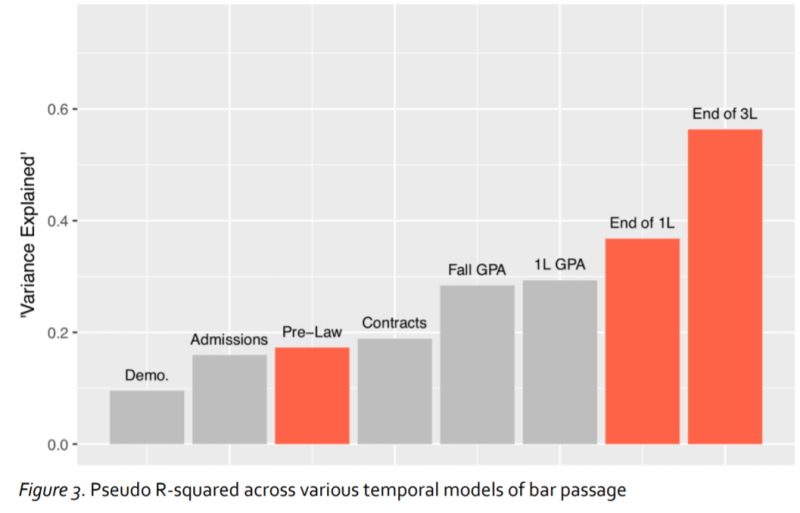