NY Times: The Bleak Job Landscape Of Adjunctopia For Ph.D.s

The humanities labor market is in crisis. Higher education industry trade publications are full of essays by young Ph.D.s who despair of ever finding a steady job. Phrases like “unfolding catastrophe” and “extinction event” are common. The number of new jobs for English professors has fallen every year since 2012, by a total of 33 percent.

In response to these trends and a longer-term decline in academic job security, the Democratic presidential candidate Bernie Sanders has made a proposal. In exchange for federal funding to reduce public college and university tuition to zero, he said, at least 75 percent of college courses would have to be taught by tenured or tenure-track professors. Currently, that proportion is less than 40 percent and dropping.

How this happened is a story of a rupture in the way the academy produces and consumes people with scholarly credentials.

In 1995, roughly 940,000 people were employed teaching college. Of those, about 400,000 had tenure or were on track to get it. They enjoyed professional status, strong job security, relatively good pay (on average), and the freedom to speak their minds. ...

The percentage of professors on the tenure track had been slowly declining since the 1970s. In the late 1990s came a demographic event that would ultimately throw the university labor market into a tailspin: the first college years of the so-called millennials, those born from the early 1980s to the mid-1990s.

Colleges swelled with students over the next decade and a half, with undergraduate enrollment increasing from 12.2 million in 1995 to a peak of 18.1 million in 2011. Colleges needed to hire hundreds of thousands of additional professors.

Administrators had options. They could have kept the ratio of tenured to nontenured about the same, using new tuition revenue to create more tenure-track positions.

But that’s not what happened. Instead, the number of contingent faculty more than doubled, to 1.1 million. The number of tenured and tenure-track faculty, by contrast, increased by only 9.6 percent, to 436,000.

It is not the case, as is sometimes said or implied, that there are fewer tenured college professors now than there used to be. In absolute terms, there are more. But 94 percent of the net increase in college professors hired to teach the millennial generation were contingent, meaning off the tenure track.

For colleges, this was cheaper. The halls of academe are known to be hospitable to people with radical views on power relationships between capital and labor, but colleges themselves are often merciless actors in the labor market. Many adjuncts earn only a few thousand dollars per course, with no health insurance or retirement benefits. Twenty-five percent of part-time faculty receive some form of public assistance. Some adjunct postings don’t require doctorates.

At the same time as the contingent ranks were growing, a new generation of students was completing bachelor’s degrees, and enrollment in Ph.D. programs increased. ... [A]t no point did universities seem to consider slowing the flow of students into the Ph.D. pipeline. The opposite happened. In 1988, the number of doctorates in the humanities conferred was estimated to be 3,570, and it increased to 5,145 in 2018. 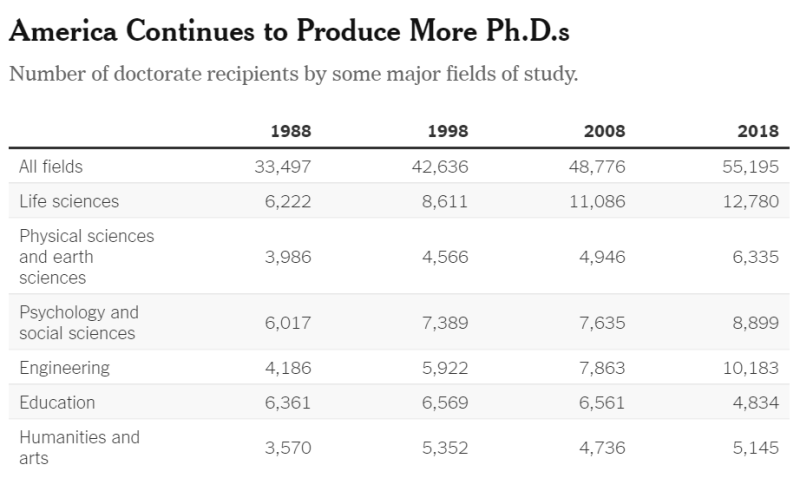 Tenured professors like having graduate students around. They teach the boring undergraduate sections for little or no pay and provide inexpensive research assistance. For many veteran scholars, training the next generation is one of the most rewarding parts of the job.

There was another complication. In 1994, a new federal law outlawed the widespread practice of requiring professors to retire at age 70. The effects of this accumulated as the baby boom generation aged. The oldest tenured boomers turned 70 in 2016, just in time to not retire and not create room for millennials hitting the job market with newly minted Ph.D.s.

Consumer preferences also shifted. Stung by ever-rising tuition costs and anxious about a treacherous job market, many students left the humanities for more job-focused majors after the Great Recession.

All of this resulted in a severe misalignment of supply and demand. Universities had spent the better part of two decades training more people for jobs that universities simultaneously decided they didn’t need, just as economic, demographic and legal conditions began further depressing the need for professors. It’s no wonder that many humanities majors are using their considerable creative and rhetorical skills to liken their job searches to various post-apocalyptic imaginings.

As competition for tenure-track jobs becomes more fierce, only the graduates of top-ranked programs have a realistic chance, and even they increasingly settle for positions at less prestigious institutions that emphasize teaching and service over research.