AccessLex, Future in Law? A Profile of Graduating College Seniors Interested in Legal Education and Careers: 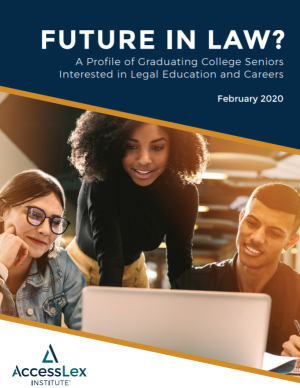 The American Association of Law Schools pioneered inquiry in this area with their groundbreaking study, Before the JD: Undergraduate Views on Law School, which surveyed undergraduates from 25 four-year institutions and first-year law students from 44 law schools, to learn more about what attracts and deters undergraduate interest in legal education and other advanced degrees. This report aims to build on this work by analyzing a broader dataset of undergraduate students—specifically, college seniors—to further describe the characteristics, academic behaviors, goals and career path considerations of those who report an interest in law compared to those who have other career and degree aspirations. Utilizing 15 years of data from the College Senior Survey administered by the Higher Education Research Institute (HERI) at the University of California, Los Angeles, our study offers insight about the traits of college seniors aspiring to a law degree and/or career, when their interest in law develops, and the extent to which their interest in law changes during college.

Law school could use an image boost, at least among college students.

A new study of undergraduate attitudes about law school confirms that the proportion of those students who are interested in getting a law degree and pursuing a legal career is on the wane. Just 6% of the college seniors surveyed in 2017 said they intended to go to law school, down from 10% a decade earlier.