Following up on my previous post, Who’s Afraid Of The IRS? Not Facebook.:  Wall Street Journal, Facebook and IRS Prepare for $9 Billion U.S. Tax Court Fight: 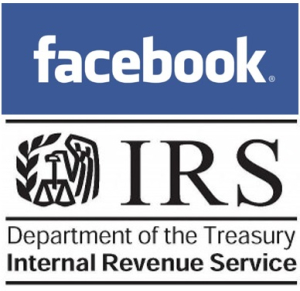 Facebook and the Internal Revenue Service will square off in a U.S. Tax Court case that could cost the social-media giant more than $9 billion and shape the government’s ability to crack down on companies’ efforts to shift profits to low-tax countries.

The trial slated to start in the week ahead caps a nine-year dispute over how Facebook structured its international operations. The IRS argues that more of the company’s profits should have been taxed at higher rates in the U.S., rather than in the company’s Irish subsidiary. Facebook contends that it deserves a refund.

Facebook’s practice of routing overseas profits to low-tax countries is common among U.S. multinationals, which have faced criticism in the U.S. and in Europe for not paying enough in taxes. The case could set the rules of the road for others with similar disputes in the pipeline.

“Both sides have salient arguments, and that makes it an exciting case,” said William Byrnes, a law professor at Texas A&M University, who expects the court to impose additional taxes on Facebook but less than the IRS wants. “What happens with Facebook sets the tone for what happens” to others.

The case stems from internal transactions Facebook conducted in the period before it went public as it was setting up its global operations. The result will likely hinge on the valuation of intellectual property used by Facebook’s overseas subsidiaries, which pay royalties to the parent company.

Facebook had incentives to set a low value for those assets, such as the user base and the company’s technology. By doing so, Facebook could reduce the stream of royalties paid to the U.S. parent that would be taxed at the 35% rate that applied before the 2017 tax law.

Instead, because of a structure involving a Cayman Islands holding company, the profits would face much lower taxes. Facebook did ultimately owe up to 15.5% on those profits because of a one-time tax imposed under the 2017 tax law. It is the gap between that and the 35% rate that is at stake in the case.

I never thought I'd be rooting for the IRS, but in this case I am.

May the IRS win. Facebook is too big for its britches, e.g., refusing to remove posts that are demonstrably false.