Despite our national mythos as a land of opportunities, financial success in the United States depends heavily on one’s birth circumstances. The U.S. demonstrates the lowest levels of intergenerational economic mobility among high-income countries. Inheritances exacerbate both these challenges because they represent about 40% of all wealth and, on average, parents pass on roughly one-half of their economic advantage or disadvantage to their children. In 2020, Americans are projected to inherit about $765 billion in gifts and bequests. Yet, the current estate and gift tax are projected to raise only $16 billion in 2020, implying an effective tax rate of 2 percent. This means that under the current tax regime, inherited income is taxed at less than one-seventh the average tax rate on income from work and savings.

In this book chapter, Batchelder claims that the exclusion from tax of inherited wealth transfers plays a key role in today’s inequity gap.

The current components of wealth transfer taxes include the gift and estate tax (40% over lifetime exemption of $11.68 million), the generation-skipping transfer tax (additional 40% tax on two or more generations younger than donor), and the income tax treatment of accrued gains on assets that are gifted or bequeathed.  Batchelder argues that these wealth transfer taxes insufficiently address undertaxation of inherited income. She calls for reforming the entire approach to taxing inheritances in order to level the playing field between income from inherited wealth and income from work.

Her reform proposal begins by examining the justifications for taxing inheritance at a higher rate than income from labor. Batchelder claims that the fairness principle mandates that heirs pay more taxes on the same amount of income, than income from work. She explains that heirs do not incur opportunity costs by having to give up leisure in order to earn money like lower income taxpayers. Thus, heirs are necessarily better off than people who have to earn the same amount of money by working. Recipients of large inheritances usually receive bigger opportunities to earn more if they choose to labor, they have better access to the finest education, they enjoy higher degree of social networking, they benefit from greater access to credit and funding, and they have a safety net that allows them to take more risks.

Batchelder cites studies on the optimal top rate of various forms of income to support her claim that the current light taxation of inheritances compared to taxation of labor and savings reduces the efficiency of the tax system and impedes growth.  She confronts the argument that wealth transfer taxes harm the economy because they reduce working and saving incentives by citing data that reveals the opposite—the amount that the affluent accumulate for wealth is unresponsive to the wealth transfer tax rate. This is so because there are more significant reasons why affluent people choose to save. They may seek stature and power (egoistic saving), they save for retirement and health expenses (life-cycle saving), they want to give to their families (altruistic saving), or they desire to compensate heirs in exchange for their care-services (exchange-motivated saving). Batchelder claims the egoistic and life-cycle motives for savings well surpass any fluctuations in wealth transfer tax rates. Essentially, the wealthy mostly save to be well off while they are alive, thus, wealth transfer taxes do not affect their considerations as much. Accordingly, taxing large wealth transfers, in Batchelder’s eyes, will create fewer economic distortions than comparable progressive taxes. And any minor negative effects of wealth transfer taxes on the working and saving decisions of wealthy donors should be offset by corresponding positive effects on the decision to increase labor and savings by the next generation (economically termed as the “income effect”).

Lastly, Batchelder mentions that the current stepped-up basis rules create capital allocation distortions and the lock-in of underperforming assets until death. In a similar manner, the current estate and gift tax regime’s complexity promotes tax-planning opportunities to those who can afford it and create deadweight loss to the economy.

In order to remedy these distortions, Batchelder proposes to level the playing field between inherent income and income from work and savings by requiring wealthy heirs to pay income and payroll taxes on inheritances they receive. Under the proposal, the current estate and gift taxes, the generation-skipping transfer tax, and the carryover basis and stepped-up basis rules will be repealed and tax will be imposed on accrued gains (beyond a threshold) on transferred assets at the time of transfer. The proposal also suggests raising more revenues from large inheritances by changing the way they are taxed—from focusing on the amount transferred to concentrating on the amount received by the heirs. The amount received as inheritance will integrate into the income and payroll taxes (without regard to NOLs) and be also subject to Social Security and Medicare taxes. Family businesses and primary residence rules will allow deferral of inheritance tax. Large accrued gains on gifts and bequests will be taxed by repealing carryover basis and stepped-up basis, under Batchelder’s proposal, similar to President Obama’s proposal by maintaining an exemption for the first $100,000 in accrued gains ($200,000 per couple) plus $250,000 for personal residences ($500,000 per couple). Gains above these exemptions would be treated as realized when transferred. To limit the effect of increasing one’s tax bracket, taxpayers could elect to carryback some of their inheritance, that is to file as if their taxable inheritance was only $100,000 in the current year and in each of the previous four years.

Each year heirs could entirely disregard $15,000 in gifts and bequests that would not count toward the $2.5 million lifetime exemption. Gifts totaling less than $2,000 a year from any given donor would not count toward this additional annual exemption (even if in aggregate they exceed $15,000) to reduce compliance costs for relatively small gifts from family and friends. Transfers to spouses and charities, as well as gifts for education, medical expenses, and support expenses for minors, would still be tax exempt. The proposal would also limit tax avoidance through a number of new rules regarding the timing and valuation of transfers through trusts and other devices.  Unlike President Obama’s proposal, however, Batchelder’s proposal would apply to charitable transfers.

The following table summarizes the major features of wealth taxes under the proposal: 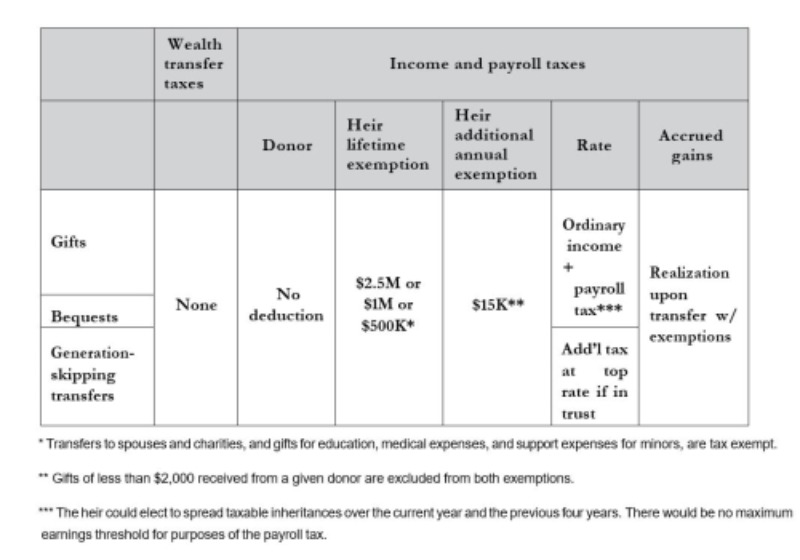 Batchelder’s goal is to soften inequalities by raising money from the most affluent people in the U.S.. The Urban- Brookings Tax Policy Center estimates her proposal would raise $340 billion over the next decade if the lifetime exemption were $2.5 million, $917 billion if it were $1 million, $1.4 trillion if it were $500,000, relative to current law.

The potential benefits of this proposals are vast. The additional revenue raised could be used to help the less privileged, lower the inequality gap, and improve social mobility. The proposed inheritance tax would distribute tax burdens much more precisely based on heirs’ economic status than the current wealth transfer taxes do. Increasing and restructuring the taxation of inheritances would improve the fairness and efficiency of the fiscal system, spur growth, and reduce labor market distortions. It will reduce tax complexity and associated tax planning incentives for taxpayers to spend time and money by decreasing the rewards for aggressive tax planning.

The last portion of the proposal contains a “questions and concerns” section that includes issues dealing with larger families, effect on charitable giving, correlation to state taxation, cross-border matters, and issues of wealth and accrual taxes (targeting assets earned and consumed during life).

Nevertheless, it seems that one disadvantage of the proposal lies in its withholding feature. Under the proposal, donors or their estates will have to remit a withholding tax on all transfers above the $15,000 annual reporting exemption at the highest income and payroll tax rate (currently 49.5 percent). While the heir could claim a refund for the withholding tax if they had not yet reached their lifetime exemption, or to the extent that their income and payroll tax rate was lower than the withholding rate, it might create liquidity problems depending on the filing time gap. This withholding feature will also add complexity, tax planning, and redundant filing, and will increase administrability costs. Another possible flaw of the proposal is its uncertainty regarding the potential effect on charitable giving by shifting the incentive for charitable contributions towards more cash and unappreciated property and possibly reducing charitable contributions in the grand scheme of things.

Here's the rest of this week's SSRN Tax Roundup: