The Limits Of Nudging: Why Can't California Get People To Take Free Money?

NPR Planet Money, The Limits Of Nudging: Why Can't California Get People To Take Free Money?: 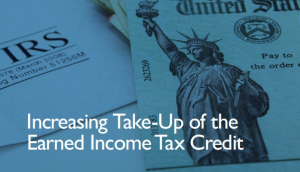 The Earned Income Tax Credit supplements incomes through the tax code, awarding thousands of dollars each year primarily to low-wage workers with kids. But there's a problem: a huge population of eligible workers fails to file their taxes and get the money each year.

Several years ago, the state of California established their own state EITC (CalEITC) on top of the federal one. Depending on how many kids they have and how much they earn, a Californian who files for both the state and federal credit can get upwards of $6,000. For the poorest households with kids, those tax credits could almost double their household income. There's a lot of money on the table to help the most at-risk families in the state, and California policymakers have grown concerned about the large number of eligible workers failing to file taxes and claim their credits.

In 2018, the state of California and the California Policy Lab, an interdisciplinary think tank of scholars from various University of California schools, started trying to solve this problem, and they commissioned one of the most fascinating experiments in "nudging" we've seen in a while.

Nudges are simple, low-cost interventions aimed at gently guiding people to make better decisions. For example, making retirement plans the default option when you join a job, which has been shown to significantly increase the likelihood you save more for retirement. The California Policy Lab and its partners decided it would try and nudge workers to claim the EITC by sending them letters and text messages. The solution seemed like a no brainer: inform people how they can get free money, and they'll get that free money! If only it were that simple.

The researchers conducted field experiments for two years on over a million Californians. They randomly divided them into treatment groups, which received various types of messages, and a control group, which received no message. ...

"We found a very precise zero effect," says Elizabeth Linos, a behavioral scientist at UC Berkeley who was also behind the study. Many of those who received the messages, she says, did visit the website advertised in the messages to help them sign up for the EITC. But in the end, they didn't fill out the forms to receive their credit. They turned down free money. "We weren't able to increase the rate at which people file for taxes and we weren't able to increase the number of households that claim the EITC," Linos says.

This experiment might seem like a gigantic failure for behavioral economics and the theory of nudging. But both researchers believe their findings support the broader idea that people aren't the perfectly calculating, error-free creatures of traditional economic models. They're turning down free money — even after they're informed they can get free money.

The author is actually arguing in favor of our crazy tax code. How many pages is it? I think around five thousand. We need to toss the entire State and Federal tax codes out the window. They can't be "modified". Then we place a property tax on Stocks and Bonds, end payroll taxes, and create a simple one-page income tax form. No more trusts, or shielded assets, or loopholes for the enormously rich.

I know some naive people refuse to believe this, but most people are adverse to work, preferring leisure, and there will always be a segment of the population more adverse to work than most of us. This forum's visitors should be more aware than most that wrestling with and completing government tax forms is work. We might well think that the work is pretty light-lifting given the compensation, especially for folks with meager incomes, but some folks are simply more work-adverse than others. A subsistence level lifestyle with ample leisure is not necessarily an irrational option -- certainly no less irrational than workaholicism. We all make these choices, and there will always be segments at the extreme ends.

There is no such thing as “free money” from government. It’s a sad commentary that one’s own money is characterized as a gift because it’s subject to arbitrary tax breaks, but only if you “qualify.”

These people aren't amoebas. Didn't they ask the people why they didn't claim the credit?

Lots of low wage people have trouble reading. Government forms might as well be in Arabic.
If you want to help low wage workers get rid of wage suppressing illegals and lower taxes.
Making them apply for handouts is degrading.

" fails to file their taxes " Could it be that these people choose to not file because they work under the table ? Could it be that were they to have paid their taxes properly and to have filed properly they wouldn't qualify for the EIC ? I wonder if that were a consideration in the study. Because, you know, people never game the system.

The real question is why. Do they see filing a tax form as entering the 'system' from which there is no exit? People are smarter than the Gov gives them credit for. I'd bet they see the bait of $6k and have decided its not worth signing up for it for some reason or other