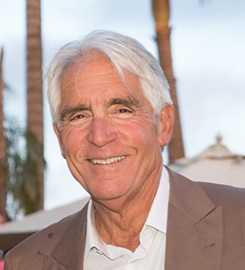 After nine years as Dean of the University of San Diego School of Law, Stephen C. Ferruolo has announced his plans to step down as dean of the law school in the summer of 2020. Dean Ferruolo will continue his role as a tenured member of the law school faculty, concentrating on teaching, scholarship, and coaching the Transactional Law Team.

We are grateful for the leadership Dean Ferruolo has provided. Notable accomplishments of Dean Ferruolo’s tenure include development of the first-year Experiential Advocacy Practicum, a marked increase in external scholarship funding, expansion of the Legal Clinics (including the launch of the Veterans and Women’s Clinics and revamping the Entrepreneurship Clinic), growth of Academic Success and Bar Program resources, creation of the Washington D.C. Externship program, new exchange partnerships with top law schools around the world, collaborating on two new concurrent degree programs, and leading the Transactional Law Team to a national championship. As a practicing member of the State Bar of California, Dean Ferruolo has advanced USD Law’s relationships with and connections to the legal community and the judiciary.

Stephen is the longest serving dean in San Diego's history. He has been a leader among deans nationwide and in California, particularly in his work advocating for bar exam reform. A search committee has been established to conduct a nationwide search, co-chaired by Professor Michael Devitt.

Congratulations on your service as dean, Stephen. And thank you for leading the fight to keep the California legal community strong and diverse in your effort to reform the bar exam, among other issues.