Following up on my previous post, Tax Profs Say IRS Is Unlikely To Pursue Whistleblower's Claim That Mormon Church Stockpiled $100 Billion In Charitable Donations And Dodged Taxes:  Wall Street Journal, The Mormon Church Amassed $100 Billion. It Was the Best-Kept Secret in the Investment World.: 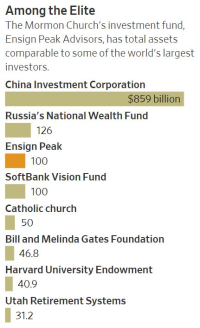 For more than half a century, the Mormon Church quietly built one of the world’s largest investment funds. Almost no one outside the church knew about it.

Some of that mystery evaporated late last year when a former employee revealed in a whistleblower complaint with the Internal Revenue Service that the fund, called Ensign Peak Advisors, had stockpiled $100 billion. The whistleblower also alleged that the church had improperly used some Ensign Peak funds. Officials of the Church of Jesus Christ of Latter-day Saints, colloquially known as the Mormon Church, denied those claims.

They also declined to comment on how much money their investment fund controls. “We’ve tried to be somewhat anonymous,” Roger Clarke, the head of Ensign Peak, said from the firm’s fourth-floor office, above a Salt Lake City food court. Ensign Peak doesn’t appear in that building’s directory.

Interviews with more than a dozen former employees and business partners provide a deeper look inside an organization that ballooned from a shoestring operation in the 1990s into a behemoth rivaling Wall Street’s largest firms.

Its assets did total roughly $80 billion to $100 billion as of last year, some of the former employees said. That is at least double the size of Harvard University’s endowment and as large as the size of SoftBank’s Vision Fund, the world’s largest tech-investment fund. Its holdings include $40 billion of U.S. stock, timberland in the Florida panhandle and investments in prominent hedge funds such as Bridgewater Associates LP, according to some current and former fund employees.

Church officials acknowledged the size of the fund is a tightly held secret, which they said was because Ensign Peak depends on donations—known as tithing—from the church’s 16 million world-wide members. The church is under no legal obligation to publicly report its finances.

But the whistleblower report—filed by David Nielsen, a former Ensign Peak portfolio manager—has heaped pressure on the church to be more transparent about its finances, something the church has avoided for decades. ...

Sam Brunson, a church member and tax law professor at Loyola University, said he wished church officials would use the $100 billion to help those in need today.

“They could go a good way to eradicating malaria, or fix Puerto Rico’s electrical grid,” he said. Alternatively, he said, the church could change what it considers tithing, allowing members to give 10% of their income to charity, rather than to the church itself. ...

Mr. Nielsen’s report, which was first reported by the Washington Post, stoked this debate. The report alleged the fund made no charitable contributions despite being incorporated as a tax-exempt charity. Fund and church officials said they haven’t violated any tax laws, and that the church organization as a whole, of which Ensign Peak is a part, puts nearly $1 billion a year toward humanitarian causes and charities. The IRS, which hasn’t accused the church of any wrongdoing, said it doesn’t comment on specific whistleblower claims. Mr. Nielsen didn’t respond to requests for comment.

Tax specialists familiar with the IRS’s whistleblower program said they didn’t expect the claim against Ensign Peak to be successful. The program receives many more claims than it acts on, and it has historically been reluctant to pursue tax issues involving churches, which have special status under the tax code. If the whistleblower’s claim is successful, that person could receive up to 30% of the proceeds collected by the IRS.

The whistleblower also accused Ensign Peak of illegally using tax-exempt donations to bail out two business ventures during the financial crisis—a life insurance company the church owned and construction of the City Creek Center, a Salt Lake City mall across the street from the church’s offices. Church officials confirmed to the Journal they had made these payments but denied they were illegal.

Gerald Causse, the presiding bishop, said the payouts during the financial crisis weren’t charitable disbursements at all, but investments. “It’s not an expenditure,” he said. “Tomorrow we can sell it and it will come back with a return.”

In the interview with the Journal, church officials maintained the payouts were not made with tithing funds, because, they said, most of the money in Ensign Peak doesn’t come directly from tithing but from returns on investment.

Tax lawyers have publicly debated whether Ensign Peak violated any laws as alleged by the whistleblower. Mr. Brunson, the tax law professor, doesn’t think so. But as a church member, he said he finds the lack of transparency frustrating, even if it is legal.

“I’m a stakeholder in the church, and society has some stake in the church too,” he said. “Even though I’m willing to tithe blindly, I would like to see what’s happening with that money.”