The Census Bureau has released estimates of state population changes between July 2018 and July 2019. One component of population changes is migration between the states. The new Census data show that Americans are continuing to move from high‐​tax to low‐​tax states.

This Cato study examined interstate migration using IRS data and found that people are moving, on net, from tax‐​punishing places such as California, Connecticut, Illinois, New York, and New Jersey to tax‐​friendly places such as Florida, Idaho, Nevada, Tennessee, and South Carolina. The Census data confirms the trends. 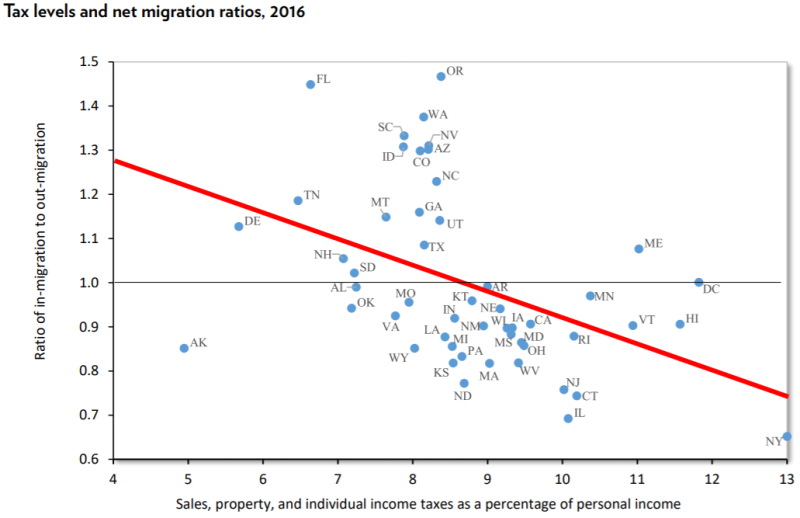 On the right, nearly all of the high‐​tax states have net out‐​migration. The exception is Maine. The blue dots on the far right are Hawaii and New York, which each have domestic migration losses of nearly 1 percent a year.

On the left, nearly all of the net in‐​migration states have taxes of less than about 8.5 percent. If policymakers want their states to attract residents, they should reduce their household tax burdens to 8.5 percent of personal income or below. The outlier at the bottom left is Alaska.

UN, please kindly explain with precision which of Cato's conclusions is incorrect.

According to people who defined 'high paying innovation sector jobs' and picked an arbitrary point of origin in order to manufacture this talking point.

I mean sure, in direct contradiction to what Cato says in the study, most of the high-tax states have growing populations and contain virtually all of the highest-performing metro areas that hold the lion's share of the upper middle class and top 1%, but sure, all of those consultants and programmers are moving from Boston and San Francisco to Knoxville, Tennesse and Butte, Montana. Uh huh.

Obligatory reminder that just 5 metro areas: San Fran, San Jose, Boston, Seattle, and San Diego account for >90% of high-paying innovation sector jobs since 2005. But yeah, all those people are leaving for the corn fields because sure they are.

Seems like several of the commenters are trying to ignore the fact that many people are migrating from high-tax states to low-tax ones.

You are misreading both Cato and the data. Cato is indeed measuring net migration, but between US states only, and by that measure CA does in fact continue to suffer a net loss. Although CA's total population nonetheless continues to grow, that growth is due solely to immigration from foreign countries, chiefly Mexico and Central America. Not surprising given their illegal immigration policies.

TL;DR: Cato has fun with specious correlation IS causation reasoning, except wherein even the correlations are based on faulty premises (as other commenters have noted, CA is actually gaining population).

Naturally, there are factors other than taxation involved in migration decisions, like weather, so it would be interesting to do this for, say, the under 65 population to better avoid such issues. Or, one could look at firm location decisions, as long as they were not firms that disproportionately served an elderly population. Nevertheless, despite its descriptive nature, this is stronger evidence for taxes haivng an effect on location decisions than lots of things the left believes are true (e.g., climate change, which is based on very little scientific evidence, and yet the left swallows it hook, line and sinker).

Gerald posted- " 'It was the Washington Republicans’ asinine SALT cap who raised taxes on New Yorkers at this time — not the state,' said Cuomo senior adviser Richard Azzopardi."
LOL- the chart uses data from *2016*- two years before the $10K SALT limitation went into effect. NY was a full SALT deduction paradise back then, right? Too bad both the out-migration ratio & the tax burden combine to make NY look pretty shitty in 2016. I'm sure it's worse now, but it was always terrible. Keep whistling past the tax graveyard, libs.

Proving once again, if you want less of something such as income, tax it.

I think what you are trying to say with the data is people make money in states where there is education and infrastructure sustained by common investment derived from taxation, then move to protect their money. It is a good observation.

This graph is misleading and the premise skewed. California has enjoyed a 6.1% increase in population since 2010. The graph suggests a net decrease in population "everyone's moving out of California!", which is not the case. - https://www.census.gov/quickfacts/CA
The graph and data presented does not account for migration to CA from other other countries or other states, which on the whole, offsets outbound migration of individuals to other states - https://www.ppic.org/publication/californias-population/
"the state experienced a net inflow of 1.6 million. But about 1.2 million more people left California for other states than came to California from other states. Natural increase—more births than deaths—added 2.8 million residents. Overall, California gained 3.1 million residents over the past 10 years."
California is the most populous state in the country with nearly 40 million people. One cannot simply point to a tax policy and say that's the key to keeping people. In such a diverse economy and such a populated state, the reasons for individuals to come and go are just as varied as the state's downsides and benefits.

There's migration, but this is not evidence that it's driven by taxation. People might just be moving to places with warmer weather as the population ages and more people retire. Or people might be moving from high density areas to low density ones. Or high cost-of-living (because of housing costs, not taxes) to low-cost-of living states. Or maybe there are more people migrating to states that border Mexico because they are coming from Mexico.

The Cato Institute is hereby advised that there are other reasons than taxes to move from high-tax states (NY, IL, NJ) to low-tax states. Weather and family are two obvious ones, and of course there can be others as well.

In addition, here's a pithy rebuttal from New York Governor Andrew Cuomo: “These right-wing cheerleaders fail to mention that it was the Washington Republicans’ asinine SALT cap who raised taxes on New Yorkers at this time — not the state,” said Cuomo senior adviser Richard Azzopardi.

“Under this [Cuomo] administration, middle-class taxes were cut to historic lows, business taxes were lowered, manufacturing taxes were eliminated, property taxes were permanently capped, unemployment was cut in half and a record number of private-sector jobs were created.”