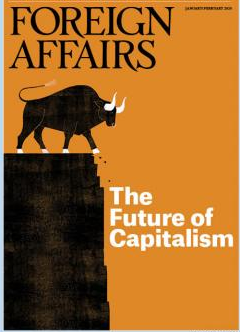 While the trade war between China and the United States has hogged headlines and driven market anxieties over the past year, an equally large threat to the global economy has gotten little attention: a looming tax war. Since the early twentieth century, countries have largely agreed on how to tax income earned by multinational corporations that conduct business across borders. But this long-standing regime is coming apart, imperiling the broader international economic order.

The current system, established through decades of practice and convention, provides a basis for determining which country can tax income earned in one jurisdiction by a business that resides in another. The regime rests on the norms set in domestic tax laws as well as a patchwork of almost 4,000 bilateral treaties. For decades, the system was stable and functional enough that no one other than international tax lawyers even talked about it.

The digital age, however, has generated new concerns for these long-established norms. The Internet and advances in telecommunications have smoothed the way for businesses to participate meaningfully in the economic lives of countries where they have no physical presence—and to do so without paying significant income taxes in those countries. European governments, especially the French government, have attempted to impose digital services taxes on giant technology firms. Their efforts have rankled the United States, which views such new taxes as unfairly singling out U.S. companies.

Other critics believe that the basic architecture of the international tax regime is a relic of an earlier time. Services and intellectual property form a growing proportion of the global economy. China, India, and other emerging markets are reshaping the economic order. Especially from the perspective of emerging market economies, these shifts bring into question the structure and utility of tax agreements reached long ago in a very different world.

As a result, a century-old consensus on how to manage international taxation has eroded, with potentially far-reaching consequences. In the absence of clarity and consensus, cross-border income could become subject to double or multiple taxation. Multinational corporations would then pull back from trade and investment. The effect of those diminished transactions would spread well beyond big companies and their shareholders, because the activity of multinationals is the backbone of the success of globalization. In the short term, the global economy could slow down and in some places slump toward stagnation or recession. And in the longer term, global economic activity could be hit hard. ...

If the OECD fails to reach an agreement, the old order will continue to decay, only faster. Many countries will almost certainly adopt digital service taxes. Governments will likely continue seeking to tax corporations headquartered outside their jurisdiction, and the conflicting rules of different governments will likely lead to frequent cases of double taxation.

Amid all of today’s threats to the international liberal order, some important arenas still boast a degree of functional multilateralism, with meaningful U.S. participation. The OECD talks are one such arena. But substantive disagreements over how to fix or stabilize the international tax regime could nonetheless produce another international economic flashpoint.

Without a compromise, multinational corporations face punishment with levies equivalent to tariffs, except on both goods and services. The consequences of inconsistent taxation of cross-border activity go far beyond the current dispute between the Trump administration and France, and they don’t only affect technology giants. All U.S. officials and companies should be deeply concerned about the perilous state of the international tax system.

A lot of that "consensus" was just a fig leaf for insiders to book income to shell companies and leave the rest of us holding the bag. Quite frankly, they could never believe what they were able to get away with year after year, decade after decade, without someone in our countries stepping up and saying: Enough. Now, we want to rebuild our countries, and that is what we are doing.