Graetz & Shapiro: The Wolf At The Door: The Menace Of Economic Insecurity And How To Fight It

Michael J. Graetz (Columbia) & Ian Shapiro (Yale), The Wolf at the Door: The Menace of Economic Insecurity and How to Fight It (Harvard University Press 2020): 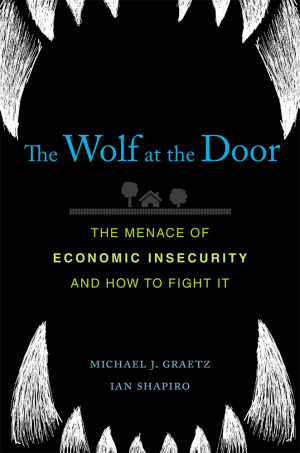 The acclaimed authors of Death by a Thousand Cuts argue that Americans care less about inequality than about their own insecurity. Michael Graetz and Ian Shapiro propose realistic policies and strategies to make lives and communities more secure.

This is an age of crisis. That much we can agree on. But a crisis of what? And how do we get out of it? Many on the right call for tax cuts and deregulation. Others on the left rage against the top 1 percent and demand wholesale economic change. Voices on both sides line up against globalization: restrict trade to protect jobs. In The Wolf at the Door, two leading political analysts argue that these views are badly mistaken.

Michael Graetz and Ian Shapiro focus on what really worries people: not what the rich are making but rather their own insecurity and that of people close to them. Americans are concerned about losing what they have, whether jobs, status, or safe communities. They fear the wolf at the door. The solution is not protectionism or class warfare but a return to the hard work of building coalitions around realistic goals and pursuing them doggedly through the political system. This, Graetz and Shapiro explain, is how earlier reformers achieved meaningful changes, from the abolition of the slave trade to civil rights legislation. The authors make substantial recommendations for increasing jobs, improving wages, protecting families suffering from unemployment, and providing better health insurance and child care, and they guide us through the strategies needed to enact change.

These are achievable reforms that would make Americans more secure. The Wolf at the Door is one of those rare books that not only diagnose our problems but also show us how we can address them.

Graetz and Shapiro wrestle with a fundamental question of our day: How do we address a system that makes too many Americans anxious that economic security is slipping out of reach? Their cogent call for sensible and achievable policies offers a pathway back to functional governance and should be read by progressives and conservatives alike.―Jacob J. Lew, 76th US Secretary of the Treasury

In The Wolf at the Door, Michael Graetz and Ian Shapiro trace masterfully the sources of insecurity increasingly haunting millions of Americans. Not content to tell the tale or just focus on politicians’ desire to exploit that insecurity, they consider important policy ideas to reward work and bolster individuals’ ability to cope with economic shifts beyond their control. The thesis of the book and its recommendations are a must-read for any serious observer of what is happening to the American economy and body politic today.―Glenn Hubbard, Columbia Business School, former chairman of the US Council of Economic Advisers

Smart, interesting, and important, The Wolf at the Door tackles the topic of policy and political responses to economic insecurity and political dysfunction with concrete recommendations and evidentiary backing. Graetz and Shapiro write with vigor and clarity, telling readers directly what policies and politics are empirically supportable, feasible, and normatively desirable, and what are not.―Jennifer Hochschild, Harvard University

Two books in one! A concise, trenchant, and very readable history of how economic insecurity produced today’s American populism―and a thoughtful, politically realistic, economically sound set of remedies for those who know both Donald Trump and Bernie Sanders are onto something, but who also know their answers to American economic insecurity won’t succeed.―David Wessel, The Brookings Institution

Michael Graetz and Ian Shapiro take a hard and pragmatic look at how America can ameliorate its inequality, focusing especially on ‘bottom-up’ approaches. Their work is deep, informed, and reeks of common sense. This book should be read by every presidential candidate and every lawmaker.―Norman Ornstein, Resident Scholar, American Enterprise Institute

It is now beyond debate that rising inequality is not only leaving millions of Americans living on a sharp edge but also is threatening our democracy. Michael Graetz and Ian Shapiro provide a fresh, insightful look at how we got here and, more to the point, how we might work our way out. For activists and scholars alike who are struggling to create a more equitable society, this is an essential read.―David Gergen, Professor at Harvard Kennedy School and adviser to four US presidents