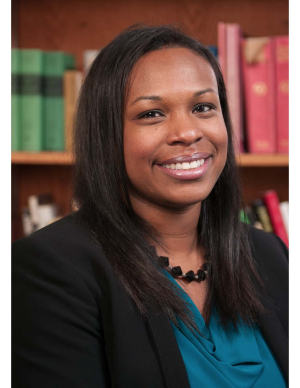 Economics professor Dania Francis researches topics such as racial and socioeconomic disparities and student-achievement gaps. But she recalls a moment during her graduate studies when a professor discouraged her from pursuing those interests.

“Don’t be the black person that studies black issues,” Ms. Francis recalled the person saying. “Study something legitimate first, so that people can understand you’re a legitimate scholar and then go on to do [race-related research] once you’ve made a name for yourself.”

For Ms. Francis, the advice represented one of the many challenges the economics field has with race issues, from a lack of minorities entering the profession and the career hurdles they face to how it approaches race-related topics.

“You can encourage as many [people of color] to enter the field as you want, but if when they get there they perceive hostility or they feel undervalued, they’re not going to stay,” Ms. Francis said. The economics field needs to consider: “What are the structures in economics that are discouraging minorities from being in those spaces and at those tables?”

The profession is grappling with such questions amid a larger conversation about how to bring more racial and gender diversity to the field. The American Economic Association’s annual conference, which begins Friday in San Diego, includes a panel titled How Can Economics Solve Its Race Problem? It follows a similarly titled panel on gender at last year’s gathering. 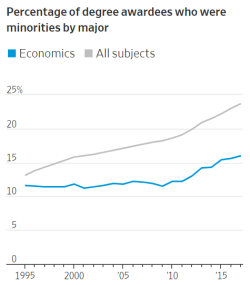 Former Federal Reserve Chairwoman Janet Yellen, the AEA’s 2020 president, and other prominent economists have said a lack of diversity limits how the field analyzes issues and crafts policies that affect swaths of people. ...

A 2018 AEA report found that black, Hispanic and Native American students were less likely to complete degrees in economics compared with all subjects.

AEA’s focus on race this year follows recent efforts to improve the profession’s culture on gender.

New York Times, A Year After a #MeToo Reckoning, Economists Still Grapple With It

The endless talk of race and gender is the main thing that holds these groups back.

I'm just content to be in a profession that is often satisfying and reasonably welcoming. (Whereas if it wasn't, that would be all the more reason to stay and fight to help keep people from getting RIPPED OFF...good job Professor Francis though I think your colleague had positive advice, just poor word choice). And having only two-thirds as many colleagues as average look like me seems barely noticeable, let alone worrying.

But I suppose the econ intelligentisia's takeaway from the gender project is to have themselves a Keynesian beauty contest...

There are no challenges with 'race issues'. She just resented being told there is a world out there for her to use her skills to study, and she ought to take an interest in it.

NB, Thomas Sowell's most scholarly work was in intellectual history, starting with the history of economic thought. Glenn Loury has published a couple dozen papers in the realms of urban economics, resource economics, and labor economics. He didn't publish any opinion journalism for nearly a decade after completing his dissertation and he kept publishing scholarly work after that.