The Unbearable Virtue Mongering Of Academics

Chronicle of Higher Education, The Unbearable Virtue Mongering of Academics: 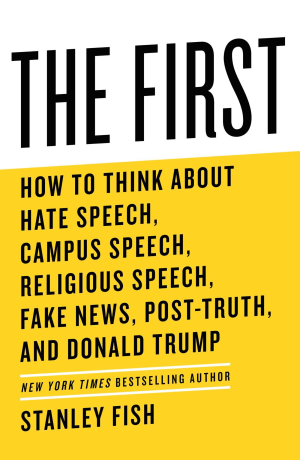 Stanley Fish is skeptical of free speech, and dismayed by the ubiquity of Subarus.

Charming and pugnacious, the literary critic and legal theorist Stanley Fish, at 81, remains one of the besieged humanities’ most prominent voices. His new book, The First: How to Think About Hate Speech, Campus Speech, Religious Speech, Fake News, Post-Truth, and Donald Trump (2019), out last month from Simon & Schuster, brings his combination of theory and polemic to a host of topical controversies. Probably no one will agree with all of it, but, as ever with Fish, it’s impossible to come away from his arguments without feeling one’s own ideas become sharper.

Fish’s career, from Miltonist to university super-administrator to best-selling intellectual pundit, is difficult to imagine now, when the prestige of the humanities has plummeted, along with the funding. From the present vantage, the influence of figures like Fish — or Judith Butler, or Henry Louis Gates Jr., or any number of other scholars with primary appointments in departments of literary study — might seem idiosyncratic.

"Programs that I grew up with and assumed would always be a part of the educational landscape have disappeared," Fish told me. "That can’t be a good thing if you are interested at all in subjects like literature, history, philosophy."

In 1959, when Fish was finishing college, he faced a choice between graduate school in English and law school. He chose English, in part because Yale offered him a free ride. I asked whether he’d make the same decision today. "That wouldn’t be a choice at all," he said. "I would go for law."

Fish spoke with The Chronicle Review about academic culture, free speech, and cars. ...

That at least nine law schools, including Yale, have hired this individual with 0.0 days of legal education, to say nothing of an actual law degree or legal experience, TO TEACH LAW, remains one of the academy's pedagogical high points. /sarc

As Fish urges, we should teach law without expressing any views about its merits -- as if it were as objective as engineering. We should leave our students with the impression that we accept the status quo -- as Fish does -- and that they should too. :)