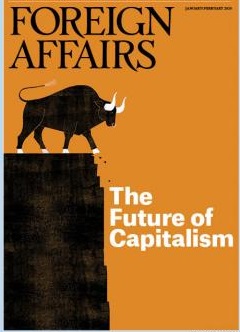 For millennia, markets have not flourished without the help of the state. Without regulations and government support, the nineteenth-century English cloth-makers and Portuguese winemakers whom the economist David Ricardo made famous in his theory of comparative advantage would have never attained the scale necessary to drive international trade. Most economists rightly emphasize the role of the state in providing public goods and correcting market failures, but they often neglect the history of how markets came into being in the first place. The invisible hand of the market depended on the heavier hand of the state.

The state requires something simple to perform its multiple roles: revenue. It takes money to build roads and ports, to provide education for the young and health care for the sick, to finance the basic research that is the wellspring of all progress, and to staff the bureaucracies that keep societies and economies in motion. No successful market can survive without the underpinnings of a strong, functioning state.

That simple truth is being forgotten today. In the United States, total tax revenues paid to all levels of government shrank by close to four percent of national income over the last two decades, from about 32 percent in 1999 to approximately 28 percent today, a decline unique in modern history among wealthy nations.

The direct consequences of this shift are clear: crumbling infrastructure, a slowing pace of innovation, a diminishing rate of growth, booming inequality, shorter life expectancy, and a sense of despair among large parts of the population. These consequences add up to something much larger: a threat to the sustainability of democracy and the global market economy.

This drop in the government’s share of national income is in part the result of conscious choices. In recent decades, lawmakers in Washington—and, to a somewhat lesser extent, in many other Western countries—have embraced a form of fundamentalism, according to which taxes are a hindrance to economic growth. Meanwhile, the rise of international tax competition and the growth of a global tax-avoidance industry have put additional downward pressure on revenues. Today, multinationals shift close to 40 percent of their profits to low-tax countries around the world. Over the last 20 years, according to the economist Brad Setser, U.S. firms have reported growth in profits only in a small number of low-tax jurisdictions; their reported profits in most of the world’s major markets have not gone up significantly—a measure of how cleverly these firms shift capital to avoid taxes. Apple, for example, has demonstrated as much inventiveness in tax avoidance as it has in its technical engineering; in Ireland, the technology giant has paid a minuscule annual tax rate as low as 0.005 percent in some years.

It is not just corporations that engage in tax avoidance; among the superrich, dodging taxes is a competitive sport. An estimated eight percent of the world’s household financial wealth is hidden in tax havens. Jurisdictions such as the Cayman Islands, Panama, and Switzerland have structured their economies around the goal of helping the world’s rich hide their assets from their home governments. Even in places that don’t show up on international watch lists—including U.S. states such as Delaware, Florida, and Nevada—banking and corporate secrecy enable people and firms to evade taxes, regulation, and public accountability.

Unchecked, these developments will concentrate wealth among a smaller and smaller number of people, while hollowing out the state institutions that provide public services to all. The result will be not just increased inequality within societies but also a crisis and breakdown in the very structure of capitalism, in the ability of markets to function and distribute their benefits broadly. ...

These enormous problems have created demands for even more extensive reforms. As younger voters tilt further to the left, delaying an overhaul of the current tax regime and continuing to strip revenue from the state may give rise to policy changes that are far more radical than those outlined here. A more chilling threat might come from the right: time and again, authoritarians and nationalists have proved adept at channeling public anger over inequality and exploiting it for their own ends.

By eating up the state, capitalism eats itself. For centuries, markets have relied on strong states to guarantee security, standardize measures and currencies, build and maintain infrastructure, and prosecute bad actors who attain their wealth by exploiting others in one way or another. States lay the basis for the healthy, educated populations that can participate in and contribute to the successful flourishing of markets. Allowing states to collect their fair share of revenue in the form of taxes will not usher in a dystopian era of oppressive government. Instead, strengthening the state will return capitalism to a better path, toward a future in which markets function in the interests of the societies that produce them, and in which the benefits of economic activity will not be restricted to a vanishingly small elite.

Gerald: "We trail pretty much every developed country in, for instance, mass transit."

The question isn't why haven't we caught up to the rest of the OECD. The real question, which has been answered, is why does it cost so much more in the U.S. for infrastructure:

An inefficient and wasteful public sector, which will never reform itself, that's why. Doesn't take a genius to figure that out, if you live in a big blue city or state.

The naysayers pay no attention whatever to the inescapable results of the federal government's revenue problem: "crumbling infrastructure, a slowing pace of innovation, a diminishing rate of growth, booming inequality, shorter life expectancy, and a sense of despair among large parts of the population."

The commenters surely must care about these things. A question therefore for all of them: how can these problems be addressed with any adequacy if the government lacks the revenue to do so?

Infrastructure by itself is a glaring example. We trail pretty much every developed country in, for instance, mass transit.

This narrative depends upon a completely unproven assumption – that the size and power of a government has to scale with the size and vitality of a market that it regulates. Why should the budget of government have to grow at the same rate as its nation’s markets? The multiple roles it plays surely don’t all require a one for one scaling. Once a road or bridge is built, traffic doubling doesn’t require a second one be built, unless government failed to properly plan in the first place. The immense growth of the tech industry really has put little pressure on government agencies or functions other than sending them careering off looking for ways to tap into it for a revenue windfall. Technology should provide efficiencies for government functions as well as marketplace players. Perhaps more so, given the rote and mundane tasks many regulators perform. Examples: EZPass replaces toll takers; the IRS gets more e-file returns now more than paper ones and processes them by computer.
There is no reason that government shouldn’t have to justify its unending demands for revenues, rather than just assume that they should increase as fast as the wealth of its citizens. Just what do its citizens get in return for this demanded tribute? Increasingly, the answer to that appears more negative than positive.

America has a much higher gross national income and similar per-capita growth rate to most higher-tax developed countries. So why should we give not just more than one dollar in four, but one dollar in three or beyond, to go back to bigger government that was (and sadly in many places still is) obstructing innovation in education, helping crony capitalism in healthcare, and doing little to secure our borders or the skies over our political and financial centers?

Tax dodging is also a fairness and efficiency concern and all else equal stopping it can cut the average compliant person's bill. TCJA took a *yuge* step against the international gimmicks, but if we need more legislative drafting or auditing, its per-capita cost is fairly minimal.

Even if you don't reject the premise of their argument, which I do, this fact alone should lead any open-minded person to question the authors' position.