Lindgren: The Religious Beliefs, Practices, And Experiences Of Law Professors

Very little is known about the religious beliefs and practices of American law professors. In the drive for diversity, religion usually takes a back seat at university campuses. About two decades ago, I surveyed law faculties at the top one hundred law schools, asking professors about their religious affiliations [Measuring Diversity: Law Faculties in 1997 and 2013, 39 Harv. J.L. & Pub. Pol’y 89 (2016).]. I found that Christians were represented at only about half their percentages in the larger population, while Jewish and nonreligious law professors were substantially overrepresented. This article begins with an update of that study, but unlike the 1990s survey, this one probes much deeper, presenting data on belief in God, church attendance, and religiously motivated discrimination.

While the pattern of underrepresentation in Christian religious sects today is similar to that of the 1990s, the differences in actually believing in God are much larger than for mere religious affiliation. 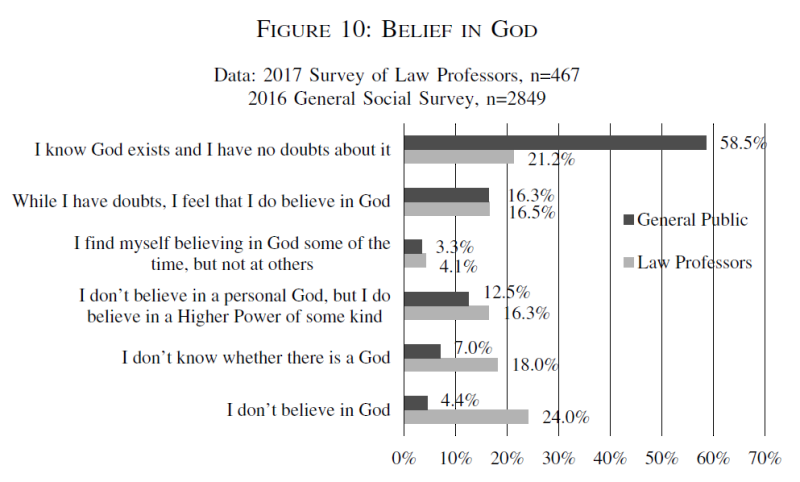 Yet only a relatively small percentage of law professors report that they have experienced religious discrimination in doing or seeking their academic jobs.

Conclusion
This first study of law professors’ belief in God and attendance at religious services shows that, by these two measures, law faculties are even less devout than mere reports of religious preferences would indicate. Though religious belief in the general population tends to fall with increased education, that phenomenon does not explain or account for the observed magnitude of the differences. For example, while 24 percent of law professors say that they “don’t believe in God” and another 18 percent “don’t know whether God exists,” among those in the general population who have graduate and professional degrees, only 5.4 percent do not believe in God and 10.4 percent do not know whether God exists. Law professors are different. They are unrepresentative of the larger population, even the highly educated larger population. In the broader public, those with graduate and professional degrees are much closer in their religious preferences, beliefs, and practices to ordinary Americans than are law professors. Accordingly, most law students continue to be exposed primarily to a narrow range of viewpoints.

Further, after several decades of diversity hiring, every large ethnic and gender group in law teaching has reached or exceeded parity with its percentages in the English-speaking full-time working population—or is getting fairly close to parity. Just about the only large demographic groups still grossly underrepresented in law teaching are Christians and Republicans.

The reasons for the underrepresentation of Christians have not been well explored. For those who embrace disparate-impact analysis, the numbers themselves are stark enough to suggest at least some degree of systematic discrimination, perhaps forming the basis for litigation. While in this study higher percentages of Christians report religious discrimination than the non-religious, so do higher percentages of Jews and those who embrace “other religions.” As for their schools preferring non-Christians over Christians, Christians are much more likely to report this behavior than Jews or the non-religious, but the percentages reporting having witnessed this discriminatory preference are still relatively small. It is likely that, while the questions in this study were well suited to revealing some religious beliefs and behavior, they were not well suited to exposing intentional discrimination.

In the rest of the university, there is some evidence of religious bias among the faculties who do the hiring. For example, a survey of over two thousand academics, mostly in sociology, examined twenty-seven characteristics that might damage or enhance a professor’s support for a faculty candidate. According to the respondents themselves, the most positive characteristic was being a Democrat and the most damaging characteristic was being a member of a fundamentalist religion. Even for law faculties, there is good scholarship that examines political discrimination and debunks some of the excuses for existing disparities. For example, James Phillips has shown that conservative law professors have generally better credentials than liberal or moderate professors, are more productive, stay productive longer, have more cites, and are nonetheless hired at lower ranked schools than their credentials would suggest. Until the same sort of work is done for religion, the disparate impact analysis for religious law professors remains mostly unconfirmed by evidence of intentional discrimination—or even by careful comparisons of credentials. That is just some of the important work that is yet to be done, work that might not only fill in some of the gaps in our knowledge but also test some of the apparent discrimination against the religiously devout in American universities.

"Law professors today are far less likely to believe in God than the general population..." Good to see the law taking the lead; the rest of the population will eventually catch up.