Forgiveness And Mercy: Our Most God-Like Power 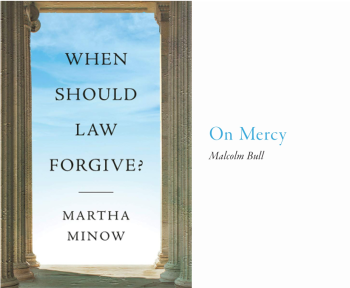 American public life is full of disputes about justice and forgiveness. Take the Dreamers—the nearly 700,000 young adults who came from Mexico and elsewhere as children, did not obtain citizenship or permanent resident status, and have been in legal limbo since President Obama signed an executive order giving them temporary legal status in 2012. Depending on whom you talk to, these immigrants should either be deported immediately or given full citizenship.

When the brother of Botham Jean, the unarmed black man shot in his Dallas apartment by Amber Guyger, a white off-dudy police officer, asked the judge if he could hug Guyger and offer forgiveness at the end of her trial, reactions were similarly divided. Many found the brother’s gesture of mercy profoundly moving; for others, it was only a distraction from justice.

Two types of forgiveness are intertwined in these instances.

The first is legal forgiveness. Our legal system is committed to justice, and to honoring the rule of law. But sometimes we make exceptions, declining to punish a defendant who has violated the law or providing partial amnesty for tax evaders. This is legal forgiveness.

The second type of forgiveness, interpersonal, is often described as a “release of resentments.” When Brandt Jean offered to forgive Amber Guyger, he was letting go of his anger against his brother’s killer and so extending interpersonal forgiveness.

How can legal forgiveness be reconciled with the rule of law? What do legal and interpersonal forgiveness have to do with one another? These questions are implicit in the current controversies about justice and mercy or forgiveness, and they are the focus of two thoughtful but idiosyncratic new books.

In “On Mercy,” Malcolm Bull conducts a clever thought experiment on the question of whether mercy might not only be reconciled with justice but could displace it at the center of our political life. ...

Even if politics is all about power, Mr. Bull reasons, there is a role for mercy, since “politics, as opposed to war, is distinguished by restraint in the use of violence.” Having opened the door for mercy, Mr. Bull soon imagines a world where mercy is ubiquitous, since mercy comes into play whenever someone has “power over” another. The vulnerable always have a claim against those who have power over them, he argues, and have no obligation, holding no power of their own, to show mercy themselves. ...

After the sustained abstract reasoning of “On Mercy,” it’s a relief to get down to particulars. Harvard Law professor and former dean Martha Minow’s “When Should Law Forgive?” offers precisely this, exploring the role of forgiveness in three wildly divergent real-world settings: the child soldiers of war-torn countries such as Sierra Leone; bankruptcy and debt forgiveness; and the use of amnesties and pardons. ...

I have long asserted that advocates for Dreamers would be more effective if their appeals were presented as pleas grounded in charity and mercy as opposed to demands grounded in rights and entitlements.