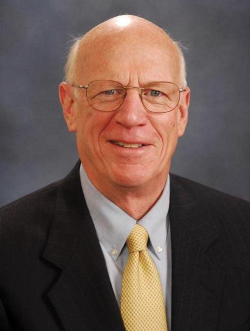 The University of Kansas School of Law community is mourning the passing of former dean and longtime professor Martin Dickinson, who died Jan. 5 in Estes Park, Colorado. He was 81.

Dickinson was KU Law’s longest-serving faculty member. He gave 48 years to the law school, from when he started teaching in 1967 until his retirement in 2015. He served as dean from 1971 to 1980, overseeing a time period that included the dedication of the law school’s current home at Green Hall.

He was a visionary leader, advocating for the advancement of diverse and female law students and faculty well before the legal profession as a whole began to do so, said Stephen Mazza, dean and professor of law. “He was also a fantastic classroom teacher who truly cared about his students,” Mazza said. “KU Law alumni across the nation frequently recognize him as one of their favorite professors.”

By Dickinson’s own estimate, 4,000 law students passed through his classes during his nearly five decades as a professor. In a recollection of his tenure for the fall 2015 edition of KU Law Magazine, Dickinson described his time as “a fascinating ride that included revolutionary changes.” ...

“I was a member of Professor Dickinson’s first tax class in 1967,” said Terry Arthur, L’69. “He inspired me to become a tax attorney and gave me the knowledge to pursue that specialty in the law. I am sure he did the same for many other KU Law students over his 48 years of teaching. He expanded the excellent reputation of the KU School of Law as dean and was instrumental in the building of a new Green Hall. He will be missed.”

Dickinson earned a bachelor’s degree from KU in 1960 and a master’s degree at Stanford University in 1961, then completed his law degree at the University of Michigan in 1964. Before returning to KU, he worked as an associate at the Denver-based law firm of Holme, Roberts & Owen. ...

A memorial service will be held at 1:30 p.m. Jan. 30 at St. Andrew’s Episcopal Church in Kansas City, Missouri. Remembrances and condolences can be shared at allnuttestespark.com.

The family suggests memorial contributions to KU Endowment, in support of the Dean Martin B. Dickinson Teaching Award, kuendowment.org/givenow; and Hospice of the Estes Valley, Rocky Mountain Conservancy.