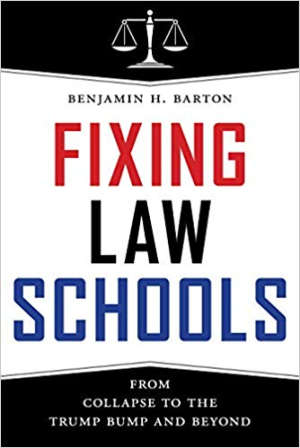 The decade after 2008 was not a good one for law schools. Applications and enrollment fell. Some closed. This is the subject of Fixing Law Schools: From Collapse to the Trump Bump and Beyond (NYU Press). But the author -- Benjamin H. Barton is professor of law at the University of Tennessee at Knoxville -- also has a path forward for law schools.

He discussed the book via email.

Q: What happened in 2008? Why was the decade that followed so hard for law schools?
A: 2008 is actually the wrong date. For the first few years of the Great Recession, law schools actually saw a rise in applications, as college graduates who worried about a weak job market opted for graduate schools of all types, including law schools. In 2011 the overall economy had started to improve, but job placement for law schools stayed very poor. Suddenly there was a flood of terrible press featuring how bad the job market was, how expensive law school had become and the doubling of student debt during the 2000s. Law schools entered into a tailspin: fewer applicants, fewer enrollees and much more discounting for the students who did come. Revenue and enrollment fell precipitously overall, by around 33 percent. Several law schools closed, and many, many more faced challenging times. ...

Q: How should law schools change?

A: I have three basic suggestions. The first is the simplest to state, but the hardest to accomplish: law schools must become cheaper, or at least stop continuously outrunning inflation. The current cost and debt levels make law school a much worse investment than it was a generation ago, when placement was stronger and tuition was radically less. In 1985, it cost an average of $2,006 for in-state tuition and $7,526 in tuition for a private law school. In 2018 dollars that tuition is only $4,713 in-state and $17,681 for a private school. The actual 2018 averages are $27,591 for in state and $49,095 for private law schools! Law schools must recognize the changing market and adjust. If they do not, state and federal laws, especially those that subsidize law schools through state support or fully subsidized federal loans, are likely to change, and not to the benefit of law schools.