Following up on my previous posts on the ABA's release of the 509 reports for every law school (links below): Mike Spivey, An In-Depth Analysis of the 2019 Law School Admissions & Entering Class Data: 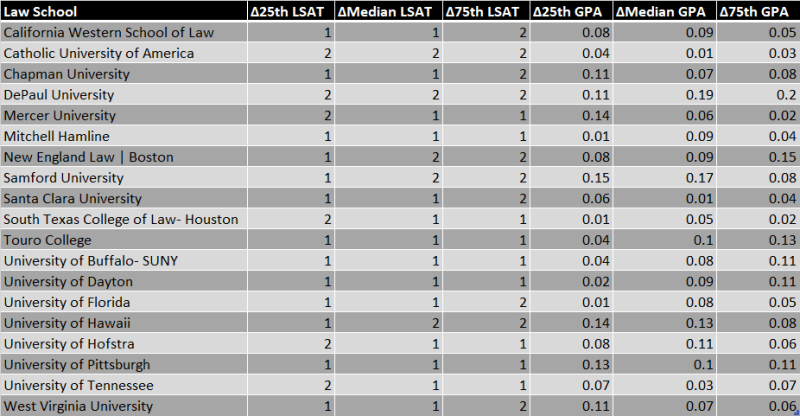 Overall, the average median LSAT at law schools went up from 155.9 to 156.4, an increase of half a point. Average median GPA went from 3.43 to 3.47. This has very real implications for both applicants and law schools.

For applicants, admissions has definitely become more competitive than a few years ago. It was predictable that increases in applicant volume would lead to more competitive admissions cycles, but what's really been a double whammy is that class sizes haven't really kept pace with the increase in applicants (as discussed above). This has enabled schools to increase their test scores and GPAs more than they might have been able to otherwise do if they were also increasing class size. It's too early to know if that will repeat this cycle, though the current increase in applicants who scored a 165+ on the LSAT bears watching.

Meanwhile, schools that are raising their medians in hopes of seeing a corresponding rankings benefit might be somewhat disappointed. Why? Because of how USNWR calculates the impact of LSAT and GPA median on its rankings. We go into much more detail in a blog post here, but a brief recap: school medians are weighed against the overall average of all schools, standardized, and then assigned their rankings weight.

So let's consider the increase in LSAT median at a given school. Since the overall average LSAT median went up by 0.5 (it may be slightly different at only USNWR-ranked schools, but for our purposes this is a pretty good estimate), a school that saw their LSAT increase by one point will see the rankings boost diluted because of the increase in national average. How much exactly depends on the school's specific LSAT score and corresponding percentile.

The same will apply to GPA. In fact, this year it's very possible for a school to have increased its median GPA but actually see its USNWR score contribution from GPA decline. Of course, the overall score is very unlikely to be seriously hurt by increasing median GPA less than the average this year. It would take serious bad luck in tiebreakers to have an actual impact on a given school's place in the rankings.

The point here is that as school admissions profiles become more competitive, schools that want to maintain their ranking must keep up with the changes in national average (or, alternatively, increase their performance in other rankings categories by a comparative amount). And schools that want to improve their ranking will need to put their efforts into a higher gear to outpace the growth in national averages. So don't expect to see major changes this year in the USNWR rankings just from median GPA and LSAT.

On the other hand, increases in the academic credentials of the incoming class (if one defines these credentials as GPA and LSAT) may lend themselves to better bar passage rates down the line. The link between test scores, grades, and ultimate bar passage is... controversial—but we feel it's reasonable to infer that an entering class that is better credentialed is unlikely to hurt bar passage rates.