The Massive Triumph Of The Rich, Illustrated By Stunning New Data

Washington Post, The Massive Triumph of the Rich, Illustrated By Stunning New Data: 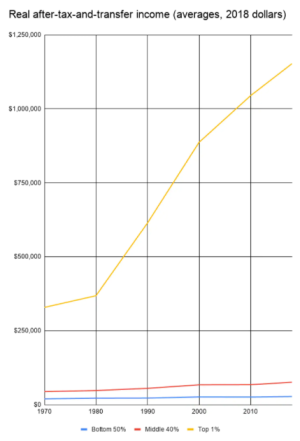 The triumph of the rich, which is one of the defining stories of our time, is generally described as largely the reflection of two factors. The first, of course, is the explosion of income among top earners, in which a tiny minority has vacuumed up a ballooning share of the gains from the past few decades of economic growth.

The second factor — which will be key to the 2020 presidential race — has been the hidden decline in the progressivity of the tax code at the top, in which the wealthiest earners have over those same decades seen their effective  tax rates steadily fall.

Put those two factors together, and they tell a story about soaring U.S. inequality that is in some ways even more dramatic than each is on its own.

A new analysis prepared at my request by Gabriel Zucman — the French economist and "wealth detector" who has become famous for tracing the hidden wealth of the super-rich — illustrates that dual story in a freshly compelling way.

"Wealth detector". Ha. See the Blouin and Robinson article a few posts up. He detected something that was not there.

Anything more recent than 2015? Thanks, Obama!