NY Times: California’s Cannabis Churches — From The Virgin Mary To Mary Jane As A Sacrament

New York Times, Inside the War for California’s Cannabis Churches: 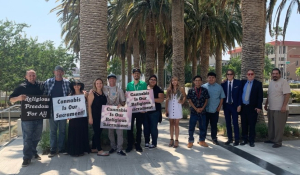 Every Sunday, about two dozen people gather at a green cabin along the main drag of Big Bear, Calif., a small mountain town known for its namesake lake. They go there for Jah Healing Church services, where joints are passed around.

April Mancini, a founder of the church, said she was drawn to the idea of cannabis as a religious sacrament back in 2013, after she met a Rastafarian who was running the place as an unlicensed medicinal dispensary.

“I’m a Christian, so I wasn’t sure in the beginning,” Ms. Mancini said. “I didn’t want to go against God.”

But she said she studied the Bible for references to cannabis, and believed she found them in scriptures that mentioned kaneh bosem oil. (English-language Bibles usually render the term “kaneh bosem,” a component of an anointing oil mentioned in Exodus, as “fragrant cane” or “sweet calamus.”)

In October 2017, Ms. Mancini filed paperwork with the state to incorporate the Jah Healing Kemetic Temple of the Divine. The newly registered church stopped requiring medical cards for marijuana for people 21 and over. Its teachings are largely Christian but borrow from a grab bag of religious traditions as varied as Rastafarianism, Buddhism and Judaism.

But before the year was up, the county sent the church a notice, accusing it of operating a dispensary. In April 2018, the county raided the church, confiscating the congregation’s sacrament in all its forms.

The resulting and continuing legal battle led Jah to ramp up efforts to establish itself as a church in the eyes of the law. ...

At the heart of this matter is a possibly unanswerable question: What is religion? And how do you prove faith?

Critics will try to measure the sincerity of the congregations’ beliefs, Ms. Rodriguez said. But for her, the church is about restoring people’s relationship with God. If the sacrament of cannabis helps people build that connection, she and her church want to facilitate that connection.

At many cannabis churches, which are scattered across the state, people don’t technically pay for marijuana. But they do tithe, or donate money, in exchange for it. And many cannabis churches show up on Weedmaps and other dispensary listing sites, often with prices attached to their offerings.

Some, like Agora Temple in Los Angeles, offer a paid membership that allows people to smoke for free in a designated common area. (Members donate to the church to take marijuana home.)

Jah Healing Church, which stocks edibles, tinctures, pre-rolls and loose marijuana, has recently changed its funding method from mandatory donations, handed to a minister, to voluntary donations placed in an envelope and dropped into a box.

Cities, law enforcement and the hundreds of licensed and regulated weed dispensaries tend to view this as part of the black market. ...

Near the center of the legal battle between cannabis churches and law enforcement in California is Matthew Pappas, a lawyer who has made a name for himself fighting to protect marijuana distribution. ...

Mr. Pappas is taking on the cause of cannabis churches, representing them in numerous cases across the state. His task is to prove that his clients’ beliefs are sincere and religious in nature, and that those beliefs are being burdened by the law in a discriminatory manner.

Mr. Pappas said he often runs into skepticism from judges and prosecutors, who will sometimes laugh or smile at the idea of a cannabis church. He takes this personally. ...

In addition to serving as legal counsel, Mr. Pappas holds the title of Steward of the Word for all churches that are members of the umbrella organization.

The Sacramental Life Church — and all its member churches — has its own series of tenets. The Nine Epiphanies, at the center, are taken from the writings of Mr. Pappas’s daughter. The Ninth Epiphany contains a prophecy, predicting the coming of a day when people will no longer be killed over religious differences; cannabis will be the force that unites all different beliefs. ...

Defining what counts as a religion under the law “has been a notoriously difficult question for the courts ever since the founding,” said James Sonne, a Stanford Law School professor and the director of the Religious Liberty Clinic at the university. ...

Lawyers for cannabis churches are arguing that marijuana is a sacrament that must be dispensed by religious institutions to ensure that the sourcing and the blessing of the product meets their standards. The courts must determine whether those practices are “analogous to mainstream faiths in terms of moral duty, ultimate concern, comprehensiveness, that sort of thing,” Mr. Sonne said. The court also must determine whether the belief system in question is “sincerely held.”

Jah has had success proving the sincerity of its religious beliefs in court, but not in proving that California’s marijuana laws are discriminatory.