Measuring The 1%: Economists Are Rethinking The Numbers On Inequality

The Economist, Measuring the 1%: Economists Are Rethinking the Numbers on Inequality:

Over a decade before thousands of protesters gathered in Zuccotti Park in New York in 2011, a little-known researcher in France sat down to write about income inequality in a new way. “The focus of our study consists in comparing the evolution of the incomes of the top 10%, the top 1%, the top 0.5%, and so on,” Thomas Piketty wrote in a paper in 1998. With his long-term co-author, Emmanuel Saez, Mr Piketty pioneered the use of tax data over survey data, thereby doing a better job of capturing the incomes of the richest. He revealed that “the 1%” had made out like bandits at the expense of “the 99%”. His research gave Occupy Wall Street its vocabulary.

What followed was an explosion of research into the causes and consequences of a surge in inequality across the rich world. In “Capital in the Twenty-First Century”, a bestseller first published in 2013, Mr Piketty argued that under capitalism rising inequality was the normal state of affairs.

Mr Piketty’s research, and more like it, became part of the political discourse in America and much of the West. Two leading candidates for the Democratic nomination for the American presidency, Elizabeth Warren and Bernie Sanders, have proposed taxes on wealth to tackle inequality—pledges cheered on by Mr Saez and Mr Piketty’s other co-author, Gabriel Zucman. In a new book, “Capital and Ideology” (currently available only in French) Mr Piketty calls for a 90% tax on wealth, such is the scale of the inequality crisis. ...

Yet just as ideas about inequality have completed their march from the academy to the frontlines of politics, researchers have begun to look again. And some are wondering whether inequality has in fact risen as much as claimed—or, by some measures, at all.

It is fiendishly complicated to calculate how much people earn in a year or the value of the assets under their control, and thus a country’s level of income or wealth inequality. Some people fail to complete government surveys; others undercount income on their tax returns. And defining what counts as “income” is surprisingly difficult, as is valuing assets such as unquoted shares or artwork. Legions of academics, not to mention government officials and researchers in think-tanks, are devoted to unpicking these problems.

The conventional wisdom to have emerged from these efforts revolves around four main points. First, over a period of four to five decades the incomes of the top 1% have soared. Second, the incomes of middle-earners have stagnated. Third, wages have barely risen even though productivity has done so, meaning that an increasing share of gdp has gone to investors in the form of interest, dividends and capital gains, rather than to labour in the form of wages. Fourth, the rich have reinvested the fruits of their success, such that inequality of wealth (ie, the stock of assets less liabilities such as mortgage debt) has risen, too.

Each argument has always had its doubters. But they have grown in number as a series of new papers have called the existing estimates of inequality into question.

Start with top incomes. ... [A] recent working paper by Gerald Auten and David Splinter, economists at the Treasury and Congress’s Joint Committee on Taxation, respectively, reaches a striking new conclusion [Income Inequality in the United States: Using Tax Data to Measure Long-term Trends (presentation here)]. It finds that, after adjusting for taxes and transfers, the income share of America’s top 1% has barely changed since the 1960s (see chart 1) [more here]. 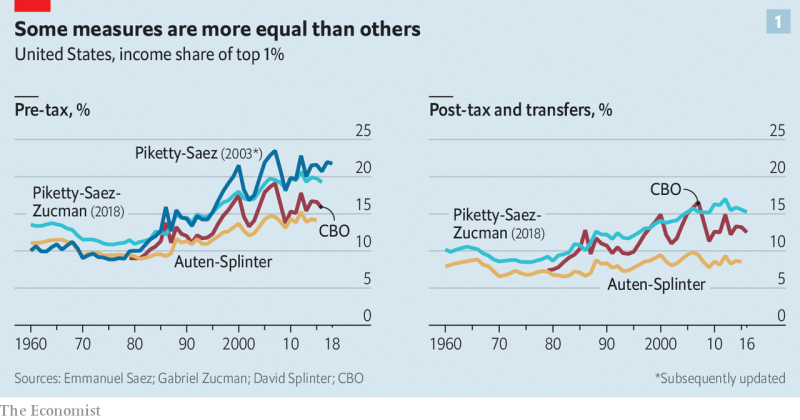 Messrs Auten and Splinter’s innovation is to correct step-by-step for what they say are a series of errors in the most famous existing inequality estimates. ...

Many of these debates also spill over into criticism of the second part of the conventional wisdom on inequality: that middle incomes have stagnated. Messrs Piketty, Saez and Zucman argue that the rising share of the top 1% of earners has come at the expense of the bottom 50%.  ... A literature review by Stephen Rose of the Urban Institute, a think-tank, describes six possible figures for American real median income growth between 1979 and 2014, ranging from a fall of 8% using Messrs Piketty and Saez’s methodology from 2003 to an increase of 51% using the CBO’s.

The third part of the conventional thinking on inequality—that productivity growth has outstripped incomes—was a central thesis of Mr Piketty’s bestseller. Indeed, it gave the book its title. He argued that at the top of the income distribution a new rentier class was emerging which made most of its money from investing or inheriting rather than working. That has seemed consistent with data across the rich world showing a rising share of gdp going to capital rather than to workers. But those data are also coming under increasing scrutiny. ...

The final and fourth part of the conventional wisdom to come under attack concerns wealth inequality, which has long been the most difficult type of inequality to judge. ... Few dispute that wealth shares at the top have risen in America, nor that the increase is driven by fortunes at the very top, among people who really can be considered an elite. The question, instead, is by just how much. ...

Will this flurry of new research change people’s minds about inequality? That will depend, ultimately, on which scholars prevail as economists thrash out the various debates. There is plenty of room to improve the data, meaning Messrs Piketty, Saez and Zucman’s critics may yet be proven wrong themselves. And even if inequality has not risen by as much as many people think, the gap between rich and poor could still be dispiritingly high.

While that long and bloody academic battle takes place it would be wise for policymakers to proceed cautiously. Proposals for much heavier taxes on high earners, or a tax on net wealth, or the far more radical plans outlined in Mr Piketty’s latest book, are responses to a problem that is only partially understood.

Spot on David. The little dirty secret these inequality Chicken Little's don't want to admit is global well being is at an all-time high. Yup, you read that right. Human beings have never been better off than they are today.

I wish there was more commentary on absolute poverty levels rather and always about equality. Bill Gates moving to town doesn’t make me worse off because I now live in a more inequitable neighbourhood.

One problem I have always had with the Pikett/Saez approach is their static view of 1% taxpayers, .i.e., assuming the population of one percenters stays the same year by year. But, I can tell you of case after case where you have a small business owner who for years makes 5% money, e.g., $400,000 a year. But when he sell his business for $40MM, he becomes a 1% for that year and that year only. Indeed, many make substantially less in retirement the following years.