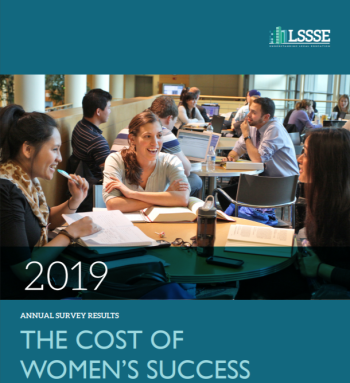 Newly-released data by the Law School Survey of Student Engagement (LSSSE) provides a compelling look at women in law schools.  Data from this Report, The Cost of Women’s Success, draw from the responses of more than 18,000 students at 70 law schools who participated in the LSSSE Survey in 2019.

“It’s no surprise that women’s deep investment in their education results in strong relationships, high levels of satisfaction, and strong academic outcomes,” said Meera E. Deo, Director of LSSSE.  “But this success comes at a cost: women have very little time for socializing, physical activity, or sleep. Plus they graduate with significant debt burdens. Women law students contribute so much. We must do more to support them.”

Engagement in campus life is an especially significant indicator of success. Law students who are deeply invested in both classroom and extracurricular activities tend to maximize opportunities for success overall.

Women are less likely than men to engage in important important social, leisure and self-care activities.