Law Students Who Handwrite Their Notes Outperform Laptop Users By One Grade (e.g., B + to A-)

Our study of whether academic performance in two required doctrinal law school courses was linked to note-taking mode found that, when controlling separately for LSAT, handwriters had a higher combined GPA in those courses than laptop users. Moreover, our results, using a quasi-experimental method (the difference-in-differences analysis) to control for LSAT and to isolate the effect of receiving a memo about the pitfalls of using a laptop to take notes, indicated a substantial positive association at a statistically significant level between handwriting and academic performance. 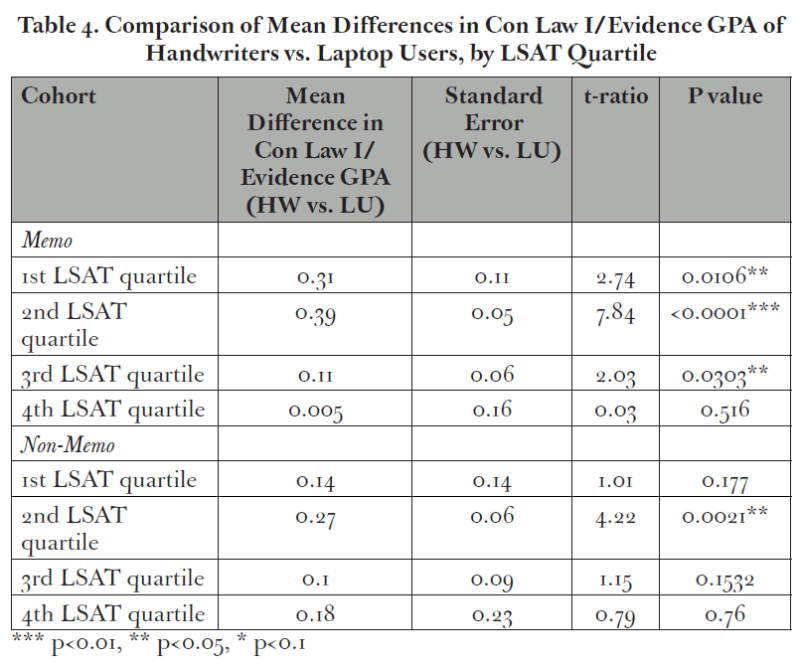 Our findings that second-year law students who handwrote their notes outperformed laptop users is consistent with the results of studies in other higher education settings. This study meaningfully contributes to the ongoing discussion about whether computer usage in the higher education classroom might be hindering academic performance and, in particular, performance on essay exams requiring conceptual applications. Future studies on note-taking mode and academic performance in the law school setting, with larger sample sizes covering multiple semesters, would be illuminating—not only to test the generalizability of our results, but to challenge the trend of student laptop use in the law school classroom. 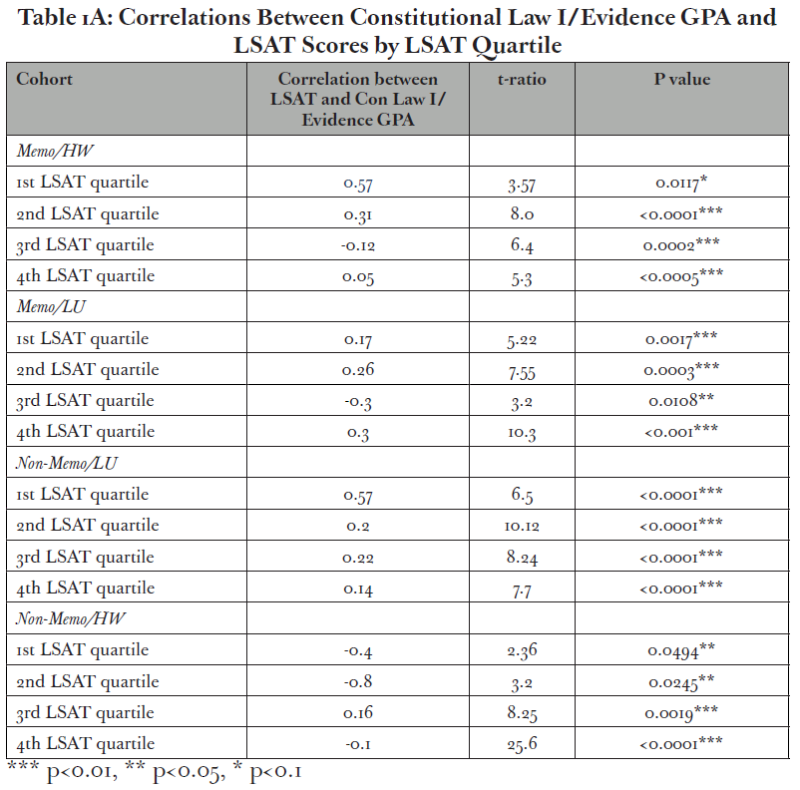 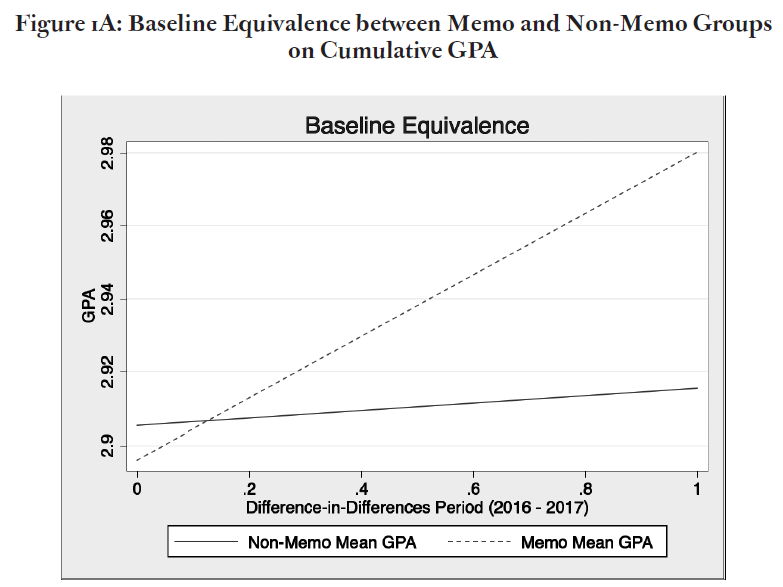 I’ve written a number of stories over the years looking at laptop bans in the law school classroom, which are the subject of rich debate. Several studies have focused on whether or not laptops are distractions during class time. But a new article in the Journal of Legal Education caught my eye, because it drills down on a related topic: Do law students who take notes by hand do better in class than those who take notes on the computer?

It’s an important question, because the laptop ban debate shouldn’t just be about whether or not students are spending too much time on Instagram while in class. It should also take into account the best methods for learning. Enter a trio of professors from Roger Williams University, two from the law school plus a mathematician with their article, Note-Taking Mode and Academic Performance in Two Law School Courses. They analyzed the grades of students in two required second-year courses (constitutional law and evidence) to see if there was a difference between those who took notes by hand and those who used computers. Prior studies in other academic settings have shown a relationship between taking notes by hand and better academic performance, but it had never been looked at before in law school. Students got to choose their note-taking method, and 67 of the 113 in the study opted to use laptops. ...

The students who took notes by hand did, indeed, get higher grades. That difference largely held true even when the researchers controlled for the LSAT scores of the students in the study sample. Handwriters, whether in the Memo or Non-Memo group, outperformed laptop users in every LSAT quartile,” the article reads. “Moreover, in the Memo group, handwriters in the top two LSAT quartiles drastically outperformed laptop users, outgaining laptop users by approximately one grade position (e.g., B to B+).”

One fundamental difficulty with this interesting study is that the groups were not randomized. It might be possible to theorize from these results for instance that the students who prefer analog methods of note taking are intrinsically better at taking exams than the students who prefer digital methods. Also, differing methods of administering the tests (analog vs digital) really ought be randomized across the groups in order to eliminate testing bias. As well, uniform tools would be required to make a truly elegant study. My preference would be fountain pens vs only one brand of laptop for example, but I suspect the ubiquitous Biro would be the most logical choice.

There is a principle in psychology that you must test in the same method as you learn in order to maximize performance. So, in this instance, if the students who learned by typing on laptops were tested by typing on a laptop, that would maximize their outcome. Students who handwrite their notes would do better handwriting their tests. Therefore, if students take notes by typing into laptops but are tested by handwriting, they will do worse.

Someone should do a followup up study looking at the value of various note-taking techniques such as Cornell Notes. It's not just what but how.