Daniel Hemel (Chicago), Argument Preview: Whose Refund Is It Anyway?: 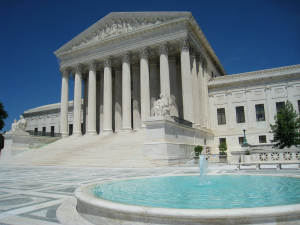 Where’s my refund? Millions of Americans ask that question each spring as they await checks from the Internal Revenue Service for tax overpayments. The question takes on added significance if your refund exceeds $4 million and you are teetering on the edge of insolvency. This was the circumstance facing United Western Bank, whose eight-year wait for a $4 million refund gave rise to Rodriguez v. Federal Deposit Insurance Corp. On December 3, the Supreme Court will decide whether—and when—to bring that wait to an end. ...

[W]hat will the justices do? One possibility is that they will dismiss the case as improvidently granted (or “DIG it,” in Supreme Court speak). The reason for a DIG would be that the 10th Circuit’s decision doesn’t turn on federal common law at all, and so the question presented isn’t actually implicated. DIGs are disfavored, though, and the 10th Circuit may have said enough about Bob Richards to satisfy the justices that the federal-common-law issue is fair game. (The 10th Circuit noted that “[f]ederal common law … provides a framework for resolving this issue,” though it then added that federal common law directs it to start with the parties’ agreement, and it went on to interpret that agreement in light of Colorado law.)

Perhaps more likely, the justices may say that state law controls the allocation of refunds within an affiliated group—and send the case back to the 10th Circuit to figure out the rest. The 10th Circuit then may repeat its conclusion that the FDIC wins under Colorado contract-law principles, but at least the Bob Richards issue will be resolved once and for all. It is harder to imagine the current Supreme Court holding that federal common law or IRS regulations control the outcome, given its general antipathy in recent decades toward extensions of federal common law as well as the preference of several justices for narrower interpretations of administrative-agency rules.

A decision is expected by summer. By that point, United Western Bank’s wait for a refund will have entered its 10th year. And even then, it might not be over.