Has The Master’s Degree Bubble Burst?

Inside Higher Ed, Has the Master’s Degree Bubble Burst?:

The explosion of new master’s degree programs in recent years hasn’t corresponded with a surge in students, analysis by the research and technology services company EAB suggests.

Megan Adams, managing director of research at EAB, said many colleges have overestimated the popularity of new degree programs. They may anticipate awarding hundreds of degrees per year, but the true number is often a single digit, she said. ... 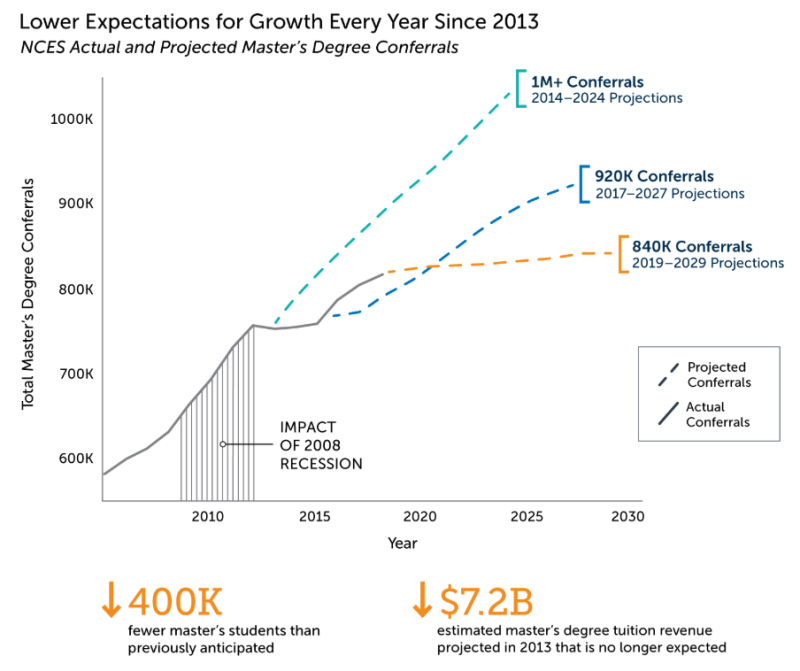 At the program level, the picture becomes more complex. Up until 2011, nearly every major master’s degree field was growing. But in 2011, the market split. Degrees in computer science, engineering and the health professions grew, while most other fields declined.

Here in reality the MBA accounts for nearly 1 in 5 advanced degrees granted in the United States, master's, doctoral, or otherwise. For master's degrees alone the MBA is about 1 in 4. Most master's degrees are vocational programs at least partially implemented to plug in the gap in employer training as employers have largely decided training their workforces is now someone else's responsibility. The degrees types that some people love to deride (without ever giving anything like a pedagogical explanation why) account for a fraction of one percent of the total, just as they do at the undergraduate level. Check the NCES data tables if you don't believe me.

My Masters Degree in Animal Hand-Puppet Husbandry has taken me far and wide - at KMart.

I think it's a mistake to consider the "Master's Degree" as a single kind of thing. There is a huge difference in the value of a Masters, depending on the discipline. Some Masters are almost worthless, and others are good terminal degrees.

Consider a MS in Computer Science, where a MS is a good indication of expertise in some subspecialty area, such as computer graphics. For each step along the way from an AA to a PhD, the increment is worth $10K -$20K additional income in average starting salary, with an AA graduate starting as $50K-$60K, an an MS starting at around $90K-$100K.

This in in contrast to a MS in Forensic Anthropology, which has no market value at all, except as a stepping stone to getting a PhD. You cannot be certified as a Forensic Anthropologist unless you have a PhD, and there are few job openings. Nonetheless, perhaps because of the popularity of shows like Bones, these programs are full -- and most of these kids will not find a job in their area of expertise.

I have three degrees -- MD, MS in Computer Science, and Masters of Public Administration (Justice Admin). I got my MS in Computer Science during the dot com boom, and was offered as much money to work in the computer graphics area as I was offered as a young physician. I got the MPA as part of my training in running a forensic medical office (and paid for by my employer). It was a useful degree, but was tailored to my specific management and legal challenges in that job -- and almost everybody in the program was in a job just like mine. I don't think it made me much more competitive when I applied to my next job, since my 20 year track record was much more important, but it did provide good structured knowledge for some of the management and administrative challenges I faced.

So, some degrees have benefits in getting that first job, some have benefits in skills once you have the job, and some are useful only in getting another degree. If educators are simply creating Masters programs without targeting it to a specific need and showing what value it provides, I'm not surprised that people aren't flocking to get them.

MBA programs turn out indoctrinated zombies that know the cost of everything but the value of nothing. MBAs should not be in charge of any business except possibly an accounting firm.