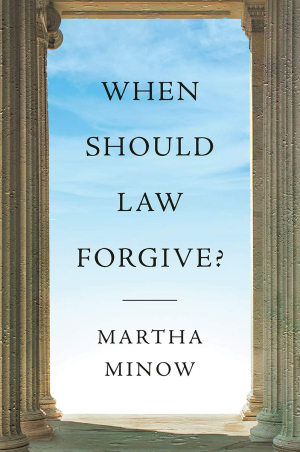 The potential power of forgiveness in an age of resentment.

Crimes and violations of the law require punishment, and our legal system is set up to punish, but what if the system was recalibrated to also weigh grounds for forgiveness? What if something like bankruptcy―a fresh start for debtors―were available to people convicted of crimes? Martha Minow explores the complicated intersection of the law, justice, and forgiveness, asking whether the law should encourage people to forgive, and when courts, public officials, and specific laws should forgive.

Who has the right to forgive? Who should be forgiven? And under what terms? Minow tackles these foundational issues by exploring three questions:

What does the international response to child soldiers teach us about the legal treatment of juvenile offenders in the United States?

There are certainly grounds for both individuals and societies to withhold forgiveness, but there are also cases where letting go of legitimate grievances can make the law more just, not less. The law is democracy’s girder beam, and Minow urges us to build forgiveness into the administration of our laws. Forgiveness, wisely exercised, can strengthen law, democracy, and respect for the humanity of each person.

Minow’s book is full of ... sharp answers to the hard question of its title. It is a compact yet panoramic addition to the literature about restorative, sometimes called reparative, justice—an old practice recently revived by a growing movement in American criminal justice. In matters involving young people, wrongful conviction, and other circumstances where fresh starts are possible for criminal offenders or defendants, victims and/or their families, and others in affected groups, this approach to justice focuses on repairing harm, not on meting out punishment. It brings these people together to work out a shared understanding of what happened and its consequences. The approach is restorative in being able to help everyone let go of grievances, overcome resentment, and resolve conflict, and to give victims the chance to ask for an apology or compensation. Minow ends her book with a piece of contemporary folk wisdom: “Forgiveness does not change the past, but it does enlarge the future.”

[T]he book’s real revelation is that forgiveness in law is not simply emblematic of a society’s treatment of wrongdoers; instead, it reflects a society’s own broader vision of itself. And in the end, Minow teaches what many who have suffered wrongfully eventually come to learn: that for one’s own sake, one must let go of the past in order to be able to turn fully and embrace the future.

“In a world of noise and confusion, animated by vengeance, Martha Minow is a voice of moral clarity: a lawyer arguing for forgiveness, a scholar arguing for evidence, a person arguing for compassion.”
- Jill Lepore, best-selling author of These Truths

“No one but Martha Minow could have written this brilliant, and brilliantly readable, meditation on the role of forgiveness in the law and of the law in forgiveness…[showing how] to move forward and rebuild while both remembering the past and getting past it.”
- Laurence Tribe, author of To End a Presidency

“Martha Minow’s work on how societies can recover from large-scale tragedies and human-rights violations has been transformational …Her insights are smart, thoughtful, and rooted in a deep, nuanced understanding of what justice sometimes demands.”
- Bryan Stevenson, founder of the Equal Justice Initiative

Eric Erickson has a great post on the powerful role of forgiveness in the Christian faith: On Forgiveness:

[D]uring Advent we all focus on the birth of Christ. It could do us some good while focusing on his birth to also focus on his death. As one Christmas song tells us, He was born to die. On that cross some two thousand years ago, the divine son of God was fully God, but also fully man. Christians focus on his divinity, but we could use some focus on his humanity. Gethsemane makes no sense without understanding Jesus, an actual historic figure whose death was documented by the Roman historians, was also fully man.

That day in Jerusalem, the innocent man was tortured, beaten to within an inch of his life, forced to carry a cross after having a crown of thorns shoved into his scalp, then nailed to that cross he had carried. Soldiers hoisted up the cross and gravity then pulled down his body around the nails that fixed him there. His reaction was remarkable. Luke, the physician who interviewed the eyewitnesses to the event, tells us Jesus cried out to God, “Father forgive them, for they know not what they do.”

Were you, an innocent person, to be subjected to that, I doubt your dying words would involve forgiving the people killing you. Luke also chronicled the execution of the first Christian martyr, Stephen. Men stoned him to death and with his dying breath he asked God to forgive his murderers.

When we encounter people who sleight us, insult us, or injure us our natural reaction is to demand an apology, judge the sincerity of the apology, then possibly give pre-conditions that must be fulfilled before we forgive. Between us and God, we must repent. But the human on the cross and the human martyr demanded no such thing. They forgave. There was no apology. There were no pre-conditions to forgiveness. There was just forgiveness.

At Christmas, nostalgia sweeps in and overwhelms us. We tend to reassess the last year or last Christmases or favorite Christmases. Often, past pain surfaces in our conscience. We have been insulted or aggrieved and we cling to those grievances. We let the things others did to us control us. Forgiveness allows us to stop letting others control us. By forgiving without condition we exercise the power of resetting a relationship in a way that prevents the other person from controlling us. In so doing, we also acknowledge that though we may be blameless in the transgression that happened, we have undoubtedly transgressed others. We should therefore forgive if only in hope that others forgive us.

In my experience, the hardest person to forgive is ourselves. We hang on to the dumb things we have done in the past and let the shame pollute our conscience. We must be willing to forgive others without condition, but we must also be willing to forgive ourselves. As the earth moves back to the starting point of a new year and we reflect on each mile of the preceding year’s orbit, we need to unshackle ourselves from our own guilt and anger at ourselves.

The only man who ever lived sin free was tortured, beaten, and executed and in his final breaths chose to forgive. If we refuse to forgive ourselves or others, we suggest our consciences have been pricked more severely than his and we know that is not so. At Christmas, give the gift of forgiveness, let go, and move on.

I previously blogged about the powerful role of forgiveness in the Christian faith:

In C.S. Lewis & Lin-Manuel Miranda: How I Found My Faith In Mere Christianity And Deepened It In Hamilton, I wrote about how the play's treatment of faith and forgiveness impacted my life.

I also blogged (here and here) the wonderful song 'Forgeivenss' by Matthew West:

It's the opposite of how you feel
When the pain they caused is just too real
It takes everything you have just to say the word...

Help me now to do the impossible
Forgiveness

It'll clear the bitterness away
It can even set a prisoner free
There is no end to what its power can do
So, let it go and be amazed
By what you see through eyes of grace
The prisoner that it really frees is you

I want to finally set it free
So show me how to see what Your mercy sees
Help me now to give what You gave to me
Forgiveness, Forgiveness