High-income taxpayers drive much of the “tax gap” — the gap between what taxpayers owe and what they voluntarily pay on time — finds a new paper from Professor Natasha Sarin and former Treasury Secretary Lawrence Summers [Shrinking the Tax Gap: Approaches And Revenue Potential], citing new IRS data for 2011 to 2013. That’s unsurprising, because the tax gap’s single largest source is the underreporting of pass-through income (income from sources such as S corporations, partnerships, and sole proprietorships), which overwhelmingly flows to wealthy households. IRS auditors looking to curb tax evasion as well as policymakers looking to close tax loopholes should make pass-throughs a prime target. ...

Taxpayers who didn’t file a return and those underpaying the IRS accounted for 20 percent of the gross tax gap, and income underreporting the other 80 percent, the latest IRS data show. Pass-throughs accounted for nearly half (44 percent) of the underreporting gap, counting both underreported income and self-employment taxes. 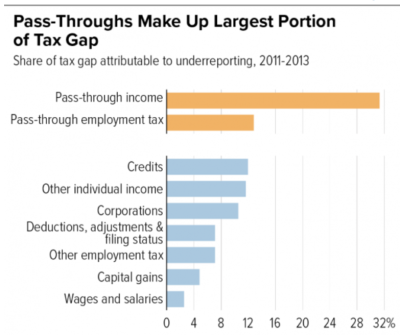 Pass-through owners are generally responsible for reporting their income to the IRS, with little independent verification by the government. This “opaqueness,” as Sarin and Summers describe it, makes tax avoidance easier.

You'd think it wouldn't be that hard to find business entities that didn't file tax returns, particularly in this day and age of electronic records searches. Or to discover under-reporting of pass-through income.

Based on my recent experiences with 2017 CP2000 notices on K-1s, the real problem is the IRS (or at least their computers) doesn't understand K-1s. This is not surprising because few people do. However, based on this and prior history, these "Tax Gap" estimates need to be taken with a grain of salt.