Bader: How To Cope With Your Law Prof’s Left Wing Bias

Hans Bader (Competitive Enterprise Institute), How to Cope With Your Prof’s Left-wing Bias:

To get the best possible grade, students may need to pander to their professors’ left-wing ideology.

So to get a good grade, moderate or conservative law students should pretend to be progressives when taking their final exam. That will make them seem more intelligent to their left-wing professors. They should echo their professor’s left-wing ideology in answering exam questions — such as questions about what a vague provision of the Constitution means, or about who should win a lawsuit where both sides have a plausible legal argument.

Parroting my professors’ left-wing ideology worked for me at Harvard Law School. For example, I got a good grade in my tort law class, because I parroted the professor’s male-bashing and left-wing extremism. I got a high grade even though I did not understand tort law as well as most of my classmates. When I failed to pander to my left-wing professors’ ideology, I got lower grades. I received only a B- in property law, which I understood better than many classmates. Why? Perhaps because I did not echo the anti-property-rights mindset of the left-wing professor.

Moderate and conservative law professors themselves have advised students to parrot their progressive professors’ views to get a good grade on their final exam. Law professor Robert Anderson advises,

Law students: Remember to echo your professor’s ideology on your final exams! If you haven’t noticed this on Twitter, many profs are incapable of separating “is” from “ought,” acknowledging trade-offs, or recognizing the validity of counterarguments.

Law professor Orin Kerr agrees. He is America’s leading expert on computer crimes and the Fourth Amendment. He notes that while “there are exceptions,” what Anderson recommends “is often good advice. I took several exams in law school while rolling my eyes about the absurdity of the nonsense I was writing. But it worked.” ...

There are a few conservative professors. But not many. Professors are becoming more and more left-wing over time. 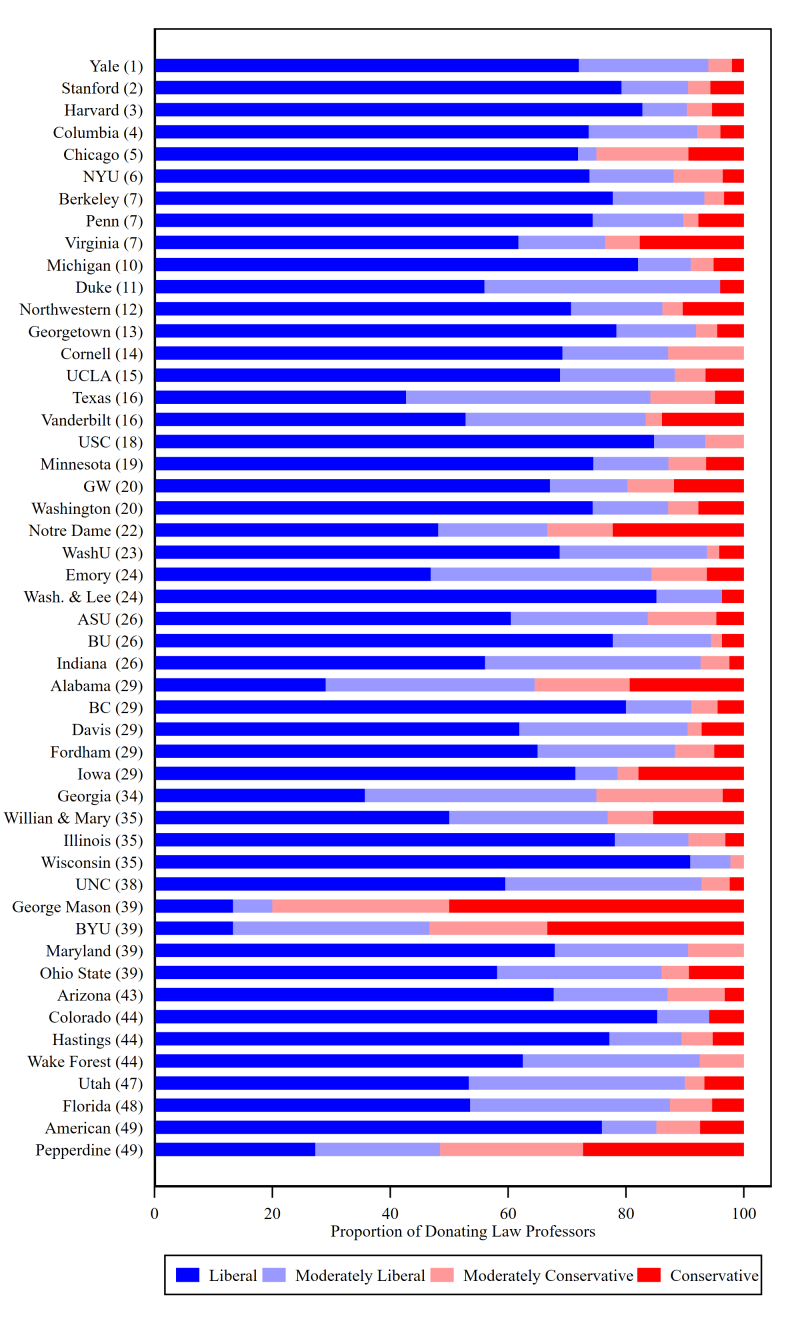 This was true a decade ago, and is likely just as true (if not more so) today. Learning to fly under the progressive "radar" is an important skillset for many. The other payoff of this, of course, is their confusion and consternation when their candidates don't get elected.

This is just good lawyering. Know your audience. Of course, it’s also why lawyers are regarded as dishonest and lacking in moral courage.

They run academics. We run the world.

This is absurd drivel. Most law faculty, whether themselves leaning left or right, welcome different views in the classroom as a way to spur conversation and interest and thoughtful consideration of the pros and cons of positions. It is regrettably this kind of insulting faux-analysis on the right that gets the most attention as illustrative of shallow thinking by people on the right.

You mean regurgitating a professor's beliefs gets you a good grade? I'm shocked.

Very sound advice. Who cares what you write on a test that no one else will never see. No one will ever hold you to these statements. What matters is your grade. You have the whole rest of your career to take principled stands.

Thanks for the link! In the linked article,I left out Professor Kerr's description of just how strong the ideological bias in grading was. As Professor Orin Kerr recounted on May 13, 2018 on Twitter, “My grades jumped considerably after [my first] year [in law school], when I realized that I should be infusing my exam answers with the professor’s ideology to do well.” Professor Kerr wrote that his “law professors sure brought their politics into the classroom. For some of them, it was essential to understand their politics if you wanted to get a good grade.”