Bloomberg, A Third of America’s Economy Is Concentrated in Just 31 Counties:

While America’s economy has grown for over a decade, that growth is increasingly concentrated in 1% of the nation’s counties.

Just 31 counties, or the top 1% by share, made up 32.3% of U.S. gross domestic product in 2018, according to data released last week by the Bureau of Economic Analysis that included nearly 20 years of county-level GDP data. ...

The nation’s economy is becoming increasingly concentrated in large cities and by the coasts—and less so in rural counties—spurring the question of whether rural areas will be increasingly left behind. ... 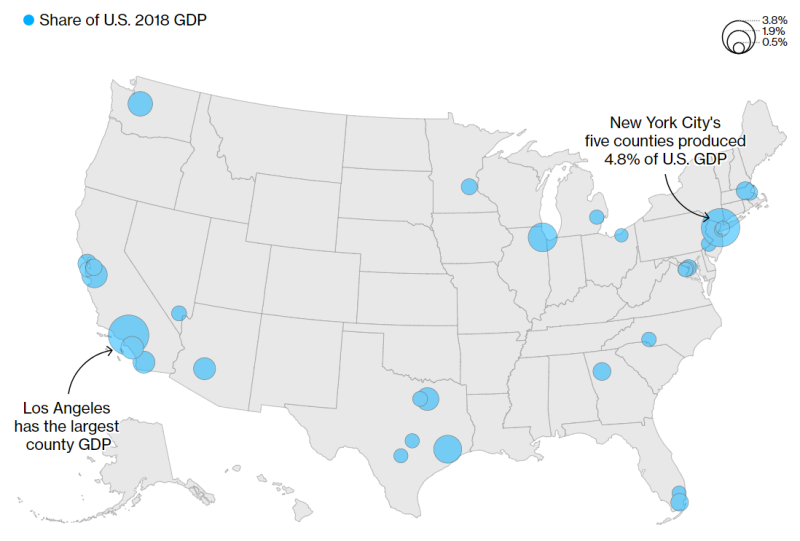 Looking at the largest counties by output, Los Angeles County, which has a GDP equivalent to Saudi Arabia, added $395.2 billion to total U.S. GDP from 2001 to 2018. New York County, home to Manhattan, added $340 billion.

The top 1% of counties were spread across 16 states and the District of Columbia, and populous states like California, Florida and Texas each had multiple counties make the cut. But all 31 counties either included or were near major U.S. cities.

@unemployed
My guess is that what happens in those 31 counties could easily move to their surrounding environs. The reverse, not so likely. An office building is an office building.

Rural Amerikkka gets dumber and poorer, and us edjikated reap wealth.

That question goes both ways: what happens to the productivity and well-being of all the other counties under such a quarantine? My guess is they would fare worse than the 31 counties with 1/3 of the economy. For example, Massachusetts without the super-powered counties in the eastern part of the state* is Vermont at best and Maine at worst.

*Given that Suffolk County is really just the city of Boston itself, I'm going to include Middlesex, Essex, and Norfolk Counties as well.

@ russ I appreciate what you're driving at, but we no longer make stuff in the USA. We only consume stuff. I predict the growth industry for the next decade will be land fills.

@PaulB You make a good point (looking at MSA might be better), but it doesn't change the overall picture. Imagine what this map will look like in 2029.

So when we build a quarantine wall around these counties, is it expected that they will continue to maintain their production of profit? This is akin to the brain claiming superiority over the other organs of the body. But let's see how well it survives without the rest of us.

This has got to be one of the least surprising "discoveries" of economic "imbalance." If you look at the accompanying article, you discover that the percentages have barely changed over 20 years. Is there anyone who didn't think that per capita GDP was higher in NYC, SF and LA than in rural Iowa?

Do these figures count all the production of every large company in the county where it's headquarters are?

What I'd really like to see what counties produce the most durable goods.

Talk about incompetence with numbers. Yes, those 31 counties account for 1% of all counties, but they account for over 25% of the country's population. Within the major metropolitan areas, the share of population and GDP in the central city county is actually declining, as most of the population increases in those areas occurs in the suburban counties.