WSJ: What Fewer Billionaires Could Mean For The Rest Of Us

Wall Street Journal, What Fewer Billionaires Could Mean for the Rest of Us: 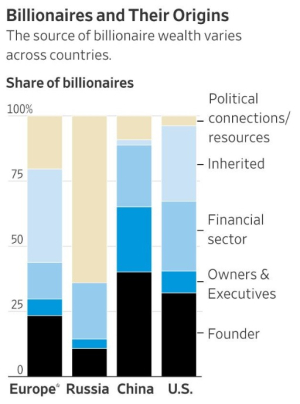 What does it mean for economic growth if scientists and entrepreneurs have less incentive to amass fortunes greater than $1 billion?

Steep taxes on the ultra-wealthy are, for some, not a means to an end but an end itself. They see the very existence of extreme wealth as inimical to economic growth, middle-class prosperity and democracy. “Every billionaire is a policy failure,” goes one progressive meme.

Sen. Elizabeth Warren doesn’t go that far. Yet her tax plans are in the same spirit. Her wealth tax of up to 6% a year, coupled with several other levies, would serve to shrink the fortunes of many billionaires and multimillionaires. It would disincentivize the accumulation of fortunes above $1 billion much as a cigarette tax discourages smoking. (They are called “Pigovian” taxes, after the economist Arthur Pigou, who proposed using taxes to discourage undesirable behavior.) ...

But should they be taxed to the point that they are no longer billionaires? That’s a tougher case to make. In a 2016 book, economist Caroline Freund, now global director for trade at the World Bank, found that countries with a lot of billionaires per capita had higher incomes per capita. She also found a country’s share of the world’s billionaires, as compiled by Forbes, corresponded closely to its share of the world’s largest, most successful companies. While this doesn’t mean billionaires make an economy successful, it does show the two go hand in hand.

How a billionaire earns his or her fortune matters, of course. Some are “rent seekers,” meaning they skim off the productive efforts of others via corruption, royal prerogative or control of some valuable market or resource. ... Ms. Freund says countries with less self-made and more inherited wealth do seem to grow more slowly. ...

By contrast a wealth tax, also embraced by presidential candidates Sen. Bernie Sanders (up to 8%) and billionaire Tom Steyer (1%), makes no distinction between when or how the wealth was acquired. It would hit not only Walmart founder Sam Walton’s children, but also future Sam Waltons; not just Bezos today, but Bezos when he became a billionaire in 1998 and Amazon sold just books and music.

Virtually all economists, who should know better, believe the only way to finance new capital formation is by reducing consumption and accumulating the excess production in the form of money savings. This is what the wealthy capital asset ownership class (millionaires and billionaires) can do, while ordinary Americans can barely meet their financial obligations week to week and month to month.

Economists and commentators subscribe to the idea that you cannot produce anything until you have produced something. If there can be no production without first saving, and saving is defined as consuming less than is produced . . . where did the first production come from out of which to save?

In economics, “income” and “demand” are the same thing, and assuming there is no artificial manipulation of demand and everything else being equal, production equals income. Yet economist continue to insist that only labor generates “effective demand,” and thus only labor is productive, completely ignoring the reality that non-human things are productive as well. The reality is that most changes in the productive capacity of the world since the beginning of the Industrial Revolution can be attributed to technological improvements in our capital assets, and a relatively diminishing proportion to human labor. Technological change makes tools, machines, structures, and processes ever more productive while leaving human productiveness largely unchanged (our human abilities are limited by physical strength and brain power — and relatively constant).

Because technology can outproduce human labor, far more is produced by people working with machines than can ever be consumed. The fact is capital, the non-human factor, is productive as well as labor. Income from production by capital is the equal in every way as income from production by labor. Thus, the belief that the only way to be able to consume is to have a job that pays a wage is a false belief, as the owners of productive capital assets generate capital wealth incomes.

It is a falsity that savings must first be accumulated to finance new productive capital formation and everybody needs a job because jobs are the only way people can produce to consume. Instead, because machinery is producing more goods than human labor, it should be clear that human labor is not as important to production as capital. People produce with both labor and capital, not labor alone. And increasingly, we don’t need human labor to produce; capital, virtually alone can produce.

Money can be created as needed by backing banknotes — new money — with the value of existing or future wealth. The only thing holding back economic development and production is the lack of financially feasible productive projects and the demand for collateral to ensure the creditworthiness of borrowers so that the new money can be repaid and cancelled.

To stimulate demand, we need to make people who are not productive, productive! But how, when the vast majority of Americans have no savings to invest and no collateral to ensure their creditworthiness as capital credit borrowers? As a result, does it necessarily follow that if an individual or a group of individuals has nothing at the moment, that same individual or group can never have anything, even if others have all they want or need?

The answer is no. The solution is to arrange for those who have nothing to have something — without taking it from anyone else. All it takes is a good idea and the ability to put the idea to work. Thus an individual or group can start with nothing, and build wealth and income by financing new capital wealth without using existing savings and without taking wealth away from somebody else.

As concentrated capital asset ownership has concentrated among a tiny wealthy capital asset ownership class, the tax base has degenerated as people’s real incomes for their labor have declined. Significantly then, no matter how much labor is necessary or unnecessary, it is imperative that the issue of concentrated capital ownership is addressed, and policies are enacted to create new capital owners of the corporations growing the economy, both established and viable start-ups, simultaneously with the economy’s growth.

For an in-depth overview of solutions to economic inequality, see my article “Economic Democracy And Binary Economics: Solutions For A Troubled Nation and Economy" at http://www.foreconomicjustice.org/?p=11