Levi Strauss and Wrangler both got their start as the go-to jeans for cowboys, railroad workers and others who pioneered the American West. Today, they are on opposite sides of a political divide that is affecting not only how people vote but what they buy.

Consumer research data show Democrats have become more likely to wear Levi’s than their Republican counterparts. The opposite is true with Wrangler, which is now far more popular with Republicans.

There is no simple explanation behind those consumer moves. Some of it is due to social and political stances companies are taking, such as Levi’s embrace of gun control. Some is tied to larger geographic shifts in the political parties themselves, as rural counties become more Republican and urban areas lean more Democratic. Wrangler is popular in the cowboy counties of the West and Midwest while San Francisco-based Levi’s resonates more with city dwellers.

Together those factors are combining to create a new, more partisan American consumer culture, one where the red/blue divisions that have come to define national politics have drifted into the world of shopping malls and online stores. 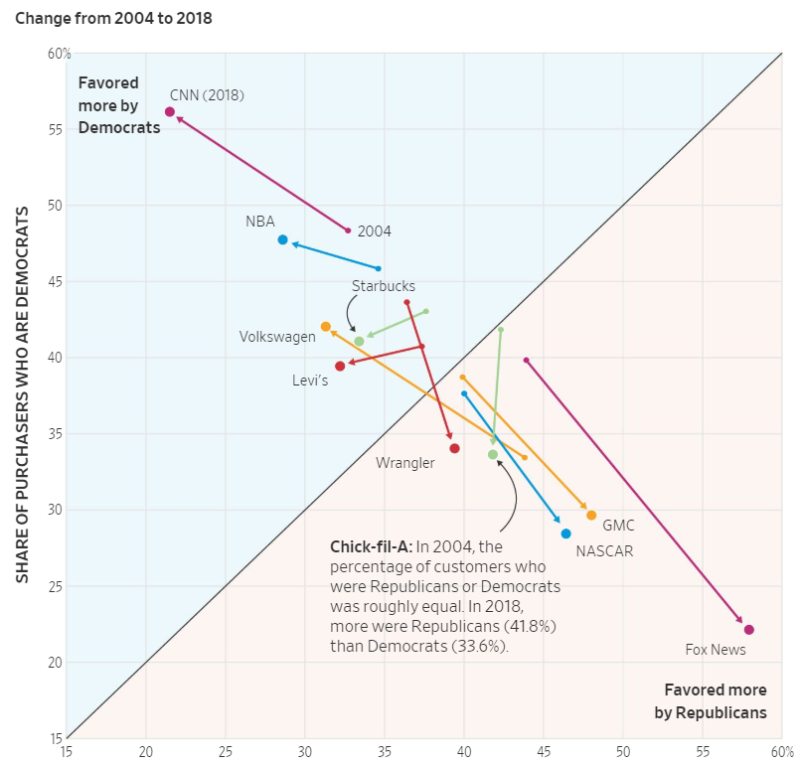 None of this has escaped big-name brands and store chains, which are trying to grow or hold on to market share by showing they support—or oppose—the same causes as their customers.

Since the 2016 election, companies have started to wade deeper into issues they would have recoiled from a decade ago, such as gun control, immigration and gay rights, in part to appeal to younger, socially conscious consumers. At the same time, the country is becoming more polarized along political lines, which is having an effect on brands that choose to stay out of the political fray.

“Consumers are not just voting in elections, they are voting at the stores by choosing brands aligned with their values,” said Richard Edelman, chief executive of Edelman, a big public relations firm that has studied the issue.

Red companies and blue companies. What could possibly go wrong?

You forgot about Gilette, that was a big one and Brawny paper towels

I think this is what political consultants meant when they said "politics flows from culture." That enigmatic statement is really just the simple reality that political preferences are correlated with nonpolitical preferences. The practical upshot is that it allows micro-targeting of political ads on web sites, and a sharpening of the divide will allow it to be achieved with greater precision and impact.