Why Are So Many Women Leaving Big Law?

American Lawyer, 'Death by a Thousand Cuts': Why Are Women Leaving Big Law?: 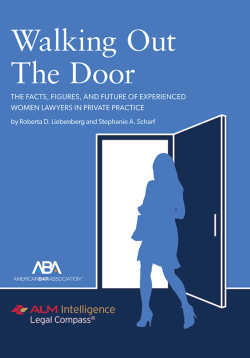 Many experienced women attorneys in Big Law love what they do, but often they leave firms because they’re dissatisfied with how their firm operates and treats them, according to a report by ALM Intelligence and the American Bar Association.

Walking Out the Door: The Facts, Figures and Future of Experienced Women Lawyers in Private Practice, is the result of a study by the ABA and ALM Intelligence, the research arm of ALM, that surveyed nearly 1,300 attorneys in the 500 largest firms in the United States. They found that more than 90% of men and women reported satisfaction in the substantive aspects of their practice such as intellectual challenge and level of responsibility. But it found large gender gaps when respondents were asked about their firm’s operational policies, including opportunities for advancement and workplace diversity.

So what exactly is going is going to be done to help the experienced female attorneys? Is there a plan in place, or is this just rhetoric?