The Truth About Income Inequality

Never in American history has the debate over income inequality so dominated the public square, with Democratic presidential candidates and congressional leaders calling for massive tax increases and federal expenditures to redistribute the nation’s income. Unfortunately, official measures of income inequality, the numbers being debated, are profoundly distorted by what the Census Bureau chooses to count as household income.

The published census data for 2017 portray the top quintile of households as having almost 17 times as much income as the bottom quintile. But this picture is false. The measure fails to account for the one-third of all household income paid in federal, state and local taxes. Since households in the top income quintile pay almost two-thirds of all taxes, ignoring the earned income lost to taxes substantially overstates inequality.

The Census Bureau also fails to count $1.9 trillion in annual public transfer payments to American households. The bureau ignores transfer payments from some 95 federal programs such as Medicare, Medicaid and food stamps, which make up more than 40% of federal spending, along with dozens of state and local programs. Government transfers provide 89% of all resources available to the bottom income quintile of households and more than half of the total resources available to the second quintile. 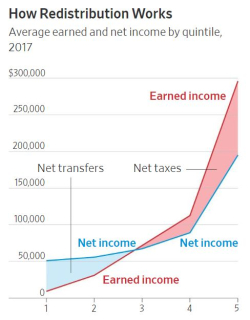 America’s system of data collection is among the most sophisticated in the world, but the Census Bureau’s decision not to count taxes as lost income and transfers as gained income grossly distorts its measure of the income distribution. As a result, the raging national debate over income inequality, the outcome of which could alter the foundations of our economic and political system, is based on faulty information.

The average bottom-quintile household earns only $4,908, while the average top-quintile one earns $295,904, or 60 times as much. But using official government data sources on taxes and all transfer payments to compute net income produces the more complete comparison displayed in the nearby chart. ...

The average top-quintile household pays on average $109,125 in taxes and is left, after taxes and transfer payments, with only 3.8 times as much as the bottom quintile: $194,906 compared with $50,901. No matter how much income you think government in a free society should redistribute, it is much harder to argue that the bottom quintile is getting too little or the top quintile is getting too much when the ratio of net resources available to them is 3.8 to 1 rather than 60 to 1 (the ratio of what they earn) or the Census number of 17 to 1 (which excludes taxes and most transfers). ...

Any debate about further redistribution of income needs to be tethered to these facts. America already redistributes enough income to compress the income difference between the top and bottom quintiles from 60 to 1 in earned income down to 3.8 to 1 in income received. If 3.8 to 1 is too large an income differential, those who favor more redistribution need to explain to the bottom 60% of income-earning households why they should keep working when they could get almost as much from riding in the wagon as they get now from pulling it.

You could have also pointed out the obvious fact that we should expect to see some inequality.  That sounds insensitive, because of the over emphasis on equality these days, but the really is that people have different work ethics and even different desires for wealth.  Given those differences, and many more, it makes sense that some people earn more than others.

Some make their careers ignoring the truth. Why let the facts get in the way of a good story?