WSJ: The Impact Of The SAT Adversity Index On Median SATs — A School-By-School Analysis

What if SAT scores could take into account whether a student went to an elite boarding school in New England or a struggling public school in Chicago’s poorest neighborhood?

The College Board, which administers the SAT, asked this question and developed an adversity score for every U.S. high school, measuring about 15 factors such as income level and crime rate in a school’s neighborhood.

It abandoned the single-number measurement over the summer after a public outcry from educators and parents. Instead, it plans to give colleges a range of socioeconomic data on high schools and their neighborhoods.

The Wall Street Journal obtained the College Board school-adversity scores, which ranked schools from 1 to 100 in degree of adversity. It then asked a Georgetown University data scientist to use those scores to adjust the average SAT results of 10,353 high schools where at least 30 students took the SAT. 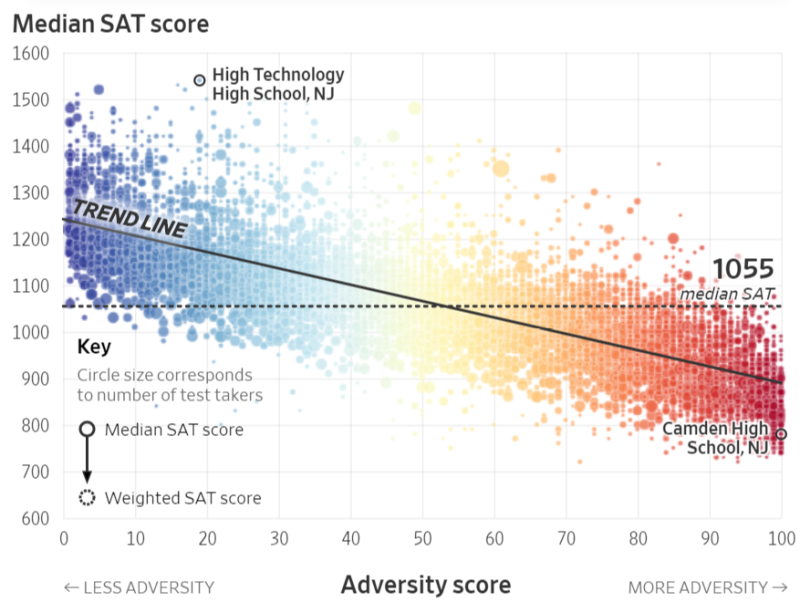 Among the findings by the data scientist:

To adjust the SAT scores, Mr. Strohl created a baseline by using the average SAT of schools with an adversity score of 50. Then he calculated the distance between that and the average of every other adversity score. Points were added or subtracted from individual schools depending on their distance from the baseline.

At Sidwell Friends School in Washington, D.C., the median SAT is 1310, which the College Board's Adversity Index would reduce to 1218.

I hope everyone understands that this and “SAT optional” is being rolled out to enroll activists of questionable intelligence and as insurance for when SCOTUS ends affirmative action.

What they’re not counting on is POTUS promulgating regulations, and/or Congress changing federal law, to make federal student loan funding contingent on colleges using a pure SAT or ACT.

The College Board is STILL doing this. They just changed the name, and foisted the data on to colleges to do their own score "adjusting". It's called "Landscape". https://professionals.collegeboard.org/landscape

I hope everyone understands that Anon has literally no idea what he (how much you wanna bet?) is talking about. And that's a pretty funny regulatory suggestion, too. When that never happens, I look forward to Anon retracting this comment.

Your score is what The Party says it is, comrade. If you don't like that, we can see that you are labeled a bigot, understand? We have ways of dealing with dissenters. We can destroy your life.

1) The adversity score, despite the rampant fearmongering, was NEVER GOING TO BE A PART OF YOUR ACTUAL SAT SCORE. It was going to be, and bear with me here, because this is really complicated, A DIFFERENT NUMBER. Like let's say there's a number. Let's call it 1200. And over here there's another number, let's say it's 75. See how they are two different numbers? Not 1275 or 1125, but a 1200 and a 75. That's how it would have worked.

2) "Mr. Strohl created a baseline...calculated... points were added or subtracted."

Oh, so not the College Board, then.

This is all absurd. I am no fan of the College Board, but the sheer amount of bad faith in discussing its stillborn adversity index is shocking even in the Age of Trump.

P.S. Anon seems unaware of the recent NBER studies concluding that, per their analysis of the data divulged in the SFFA litigation, about 1/3 of white students at Harvard would not have gotten in except that they were legacies, athletes, development cases, or children of faculty.

It might actually be as easy as sending a Dear Colleague Letter. Deal with it.

They ought to take a look at those very poor schools that managed to 'punch above their weight class' and see if they can generate a plan to try at other schools.

I forgot gay marriage was only about equality and there was nothing else coming down the pike. Slippery slope is merely a sexy-sounding fallacy. And guys, the gun buy-back is strictly voluntary. And guys, this is the last amnesty. And guys [insert countless other silly propositions a political novice would fall for].

Also... why did you mention race? Asking for a friend.

You mentioned race in the very first comment in this thread. Shoo.

Links take ages to get through moderation here but the working titles of the NBER papers are "Legacy and Athlete Preferences at Harvard" and "Divergent: The Time Path of Legacy and Athlete Admissions at Harvard." There is apparently a third NBER paper up by the same authors that I have not yet read, "Recruit to Reject? Harvard and African American Applicants."

The long and short of it is that the authors find that 43% of white Harvard students during the years in question/litigation were what they call "ALDC": Athletes, Legacy, Dean's List [read: development cases, children of national/international politicians and celebrities, etc] and Child of Faculty. Their analysis concludes that 75% of this cohort would likely not have gotten into Harvard without those attribute(s), and 75% of that 43% is 32.25%.

But wait, it gets better! The authors also conclude from the data that recruited athletes have nearly a 90% chance of acceptance, compared to ~6% for the overall applicant pool. Or compare to ~68% for the average college nationwide. I think even Cooley was more selective than that most years...

@UN --
Why do you find it discomforting or even surprising that Harvard has a very high acceptance rate for students that it actually recruits?
And why the antipathy toward legacy admits? Private institutions that depend on private support tend to adopt policies and practices that reward and encourage the institutional affinity and loyalty that lead to such support. Perhaps it's just me, but I simply don't find that noxious or problematic.

When it comes to evaluating merit I think it makes perfect sense to take into account various sociological or demographic advantages and disadvantages; indeed I think private colleges and universities should do this. Yet, I am exceedingly skeptical about the use of any mathematical score or formula to accomplish this, since it will of course be terribly flawed and inevitably gamed.