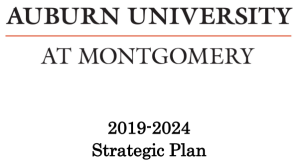 Auburn University at Montgomery, where I teach, recently completed a common organizational ritual: It drafted a strategic plan. The process took months and entailed work by a variety of committees, at considerable expense. When it was completed, faculty and staff applauded. Then most, on returning to their offices, promptly consigned the new document to the trash. In the majority of organizations, workers respond to strategic plans with the same cynicism, nodding and smiling in public while sighing and rolling their eyes in private.

The typical strategic plan begins with an anodyne statement of principles, lists several general goals, and finally recounts a series of initiatives that the institution will undertake to realize these objectives. In its statement of principles, AUM’s plan asserts that the university seeks to “provide quality and diverse educational opportunities,” offering a “student-centered experience” with “excellence as our standard.” These are more specific than Google’s old mantra, “Don’t be evil,” but not much. Presumably every institution of higher learning shares these goals—none would boast that “adequacy is our standard.” ...

Strategic planning, the way it’s practiced by most institutions in the U.S., is a fraud. At its best, it’s little more than a public-relations exercise, stating what people in the organization already know. Good managers can usually list their goals on a note card and explain how they intend to achieve them on a few sheets of paper. They have a plan and so have no need of planning. Strategic planning merely offers incompetent managers a shield, hiding their lack of understanding and direction under a blanket of orotund verbiage.

Planning makes the difference between a mob (that will soon wander off) and an *organization.* The great tax prof Steven Wrappe suggested cutting through orotund verbiage with a series of "why's." The argument either comes out or falls apart.

Strategic Planning With Disney at GWU

Washington, DC, has sometimes been called “Disneyland on the Potomac,” since it has The Magic Kingdom at one end of Pennsylvania Ave, and Fantasyland at the other.

This has generally been regarded as a joke or even a putdown, but where I teach - George Washington University [GWU] - dreams can come true, it can happen to you . . .

Here are a few excepts from a recent article in The Chronicle of Higher Education entitled
A University Wanted to Improve Its Culture. So It Called Disney

Last year, the university paid the Disney Institute, a consulting arm of the Walt Disney Company, to administer a climate survey to faculty and staff.

So far, the rollout of the effort has been bumpy. . . . a skeptic said he’s so confused by what’s going on that he’s calling this term the “semester at sea.” “The whole point of a university is that we are not in a fantasy world.”

The only thing more dangerous than evidence compiled from a poorly designed survey, said Gregory D. Squires, a sociology professor, would be acting on the basis of that evidence.

Still, Disney’s involvement frustrated some faculty members. “The whole point of a university is that we are not in a fantasy world,” said Bernard A. Wood, a professor of human origins, in GW’s paleobiology center. “We deal with real problems. We are not aiming to make students smile all the time.”

Some professors objected to how the values and priorities were delivered. They were presented as, “We cooked up the solution for you. Here it is,” said Schulteiss, the history-department chair.

The cards printed with GW’s values included statements like “I keep areas clean, well-maintained, and inviting,” and “I follow a principled approach with sincerity, truth, and honesty.” Grinker challenged professors to read the cards without thinking of George Orwell's Nineteen Eighty-Four.