“Yes, billionaires will have to pay a little more,” Senator Elizabeth Warren said of the revised tax package she introduced recently, “six cents on each dollar.”

This modest-sounding proposal, though, would have a far-reaching impact on the wealthiest Americans when combined with her other tax plans — shrinking colossal fortunes over time and making it much more difficult to hand down multibillion-dollar legacies.

The tax bite for any individual would not equal the $100 billion that Bill Gates jokingly cited, but over time it would still sting, according to estimates by two economists who advised Ms. Warren. If her wealth tax had been in effect since 1982, for example, Mr. Gates, who had made his first billion dollars by 1987, would have had $13.9 billion in 2018 instead of $97 billion. Jeff Bezos, the world’s richest person, would have had $48.8 billion last year instead of $160 billion. ...

As for the 400 people who made it to Forbes magazine’s list of the country’s wealthiest people, each would have an average worth of $3.1 billion, down from the current $7.2 billion. 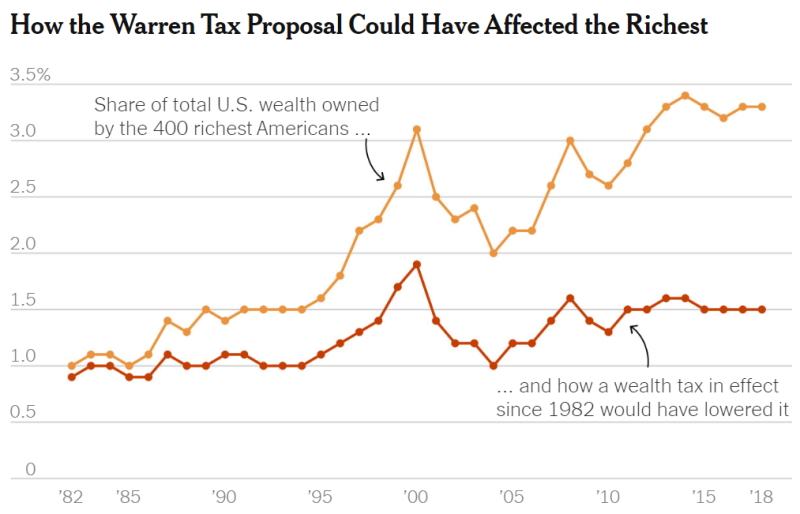 Whether you think that is the program’s greatest feature or its worst flaw depends on how you think wealth is best created and distributed.

Since it won't pass, and parts of it are unconstitutional, it probably won't do anything