NY Times: How FedEx Cut Its Tax Bill To $0

New York Times, How FedEx Cut Its Tax Bill to $0:

In the 2017 fiscal year, FedEx owed more than $1.5 billion in taxes. The next year, it owed nothing. What changed was the Trump administration’s tax cut — for which the company had lobbied hard.

The public face of its lobbying effort, which included a tax proposal of its own, was FedEx’s founder and chief executive, Frederick Smith, who repeatedly took to the airwaves to champion the power of tax cuts. “If you make the United States a better place to invest, there is no question in my mind that we would see a renaissance of capital investment,” he said on an August 2017 radio show hosted by Larry Kudlow, who is now chairman of the National Economic Council.

Four months later, President Trump signed into law the $1.5 trillion tax cut that became his signature legislative achievement. FedEx reaped big savings, bringing its effective tax rate from 34 percent in fiscal year 2017 to less than zero in fiscal year 2018, meaning that, overall, the government technically owed it money. But it did not increase investment in new equipment and other assets in the fiscal year that followed, as Mr. Smith said businesses like his would.

Nearly two years after the tax law passed, the windfall to corporations like FedEx is becoming clear. A New York Times analysis of data compiled by Capital IQ shows no statistically meaningful relationship between the size of the tax cut that companies and industries received and the investments they made. If anything, the companies that received the biggest tax cuts increased their capital investment by less, on average, than companies that got smaller cuts. 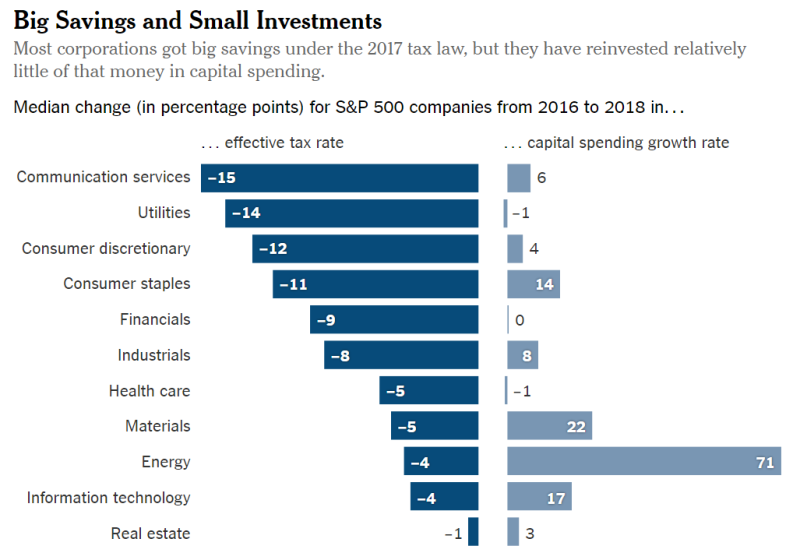 As for capital investments, the company spent less in the 2018 fiscal year than it had projected in December 2017, before the tax law passed. It spent even less in 2019. Much of its savings have gone to reward shareholders: FedEx spent more than $2 billion on stock buybacks and dividend increases in the 2019 fiscal year, up from $1.6 billion in 2018, and more than double the amount the company spent on buybacks and dividends in fiscal year 2017. ...

FedEx’s use of its tax savings is representative of corporate America. Companies have already saved upward of $100 billion more on their taxes than analysts predicted when the law was passed. Companies that make up the S&P 500 index had an average effective tax rate of 18.1 percent in 2018, down from 25.9 percent in 2016, according to an analysis of securities filings. More than 200 of those companies saw their effective tax rates fall by 10 points or more. Nearly three dozen, including FedEx, saw their tax rates fall to zero or reported that tax authorities owed them money.

From the first quarter of 2018, when the law fully took effect, companies have spent nearly three times as much on additional dividends and stock buybacks, which boost a company’s stock price and market value, than on increased investment. 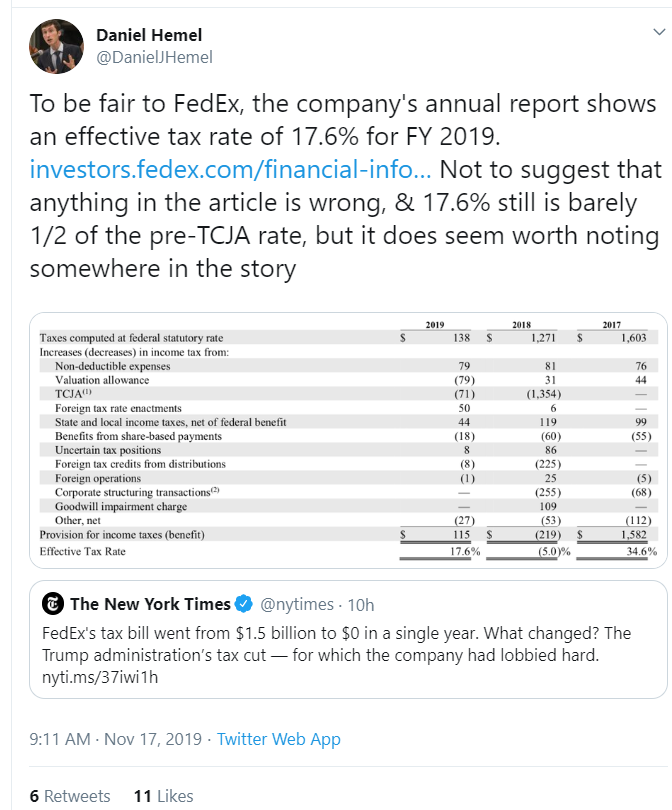 The New York Times published a distorted and factually incorrect story on the front page of the Sunday, November 17 edition concerning FedEx and our billions of dollars of tax payments and billions of dollars of investments in the U.S. economy. Pertinent to this outrageous distortion of the truth is the fact that unlike FedEx, the New York Times paid zero federal income tax in 2017 on earnings of $111 million, and only $30 million in 2018 – 18% of their pretax book income. Also in 2018 the New York Times cut their capital investments nearly in half to $57 million, which equates to a rounding error when compared to the $6 billion of capital that FedEx invested in the U.S. economy during that same year.

I hereby challenge A.G. Sulzberger, publisher of the New York Times and the business section editor to a public debate in Washington, DC with me and the FedEx corporate vice president of tax. The focus of the debate should be federal tax policy and the relative societal benefits of business investments and the enormous intended benefits to the United States economy, especially lower and middle class wage earners.

I look forward to promptly hearing from Mr. Sulzberger and scheduling this open event to bring further public awareness of the facts related to these important issues.

The Fedex rebuttal characterizes the NYT article as "distorted and factually inaccurate" and then proceeds to offer exactly nothing by way of correction other than to assert that the NYT did pretty much the same.