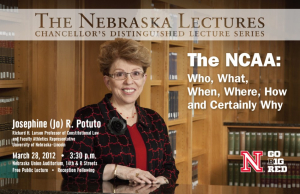 The longest-serving female professor at the University of Nebraska-Lincoln has sued the university, alleging she has received unequal pay because of her gender.

Josephine Potuto has been a law professor for 45 years and is the longest continuously serving professor in the NU College of Law, male or female.

The suit was filed Tuesday in Lancaster County District Court by her Lincoln-based attorneys, Vincent Powers and Kathleen Neary. The defendant officially is the governing board of the NU system, the Board of Regents. ...

The suit says pay discrimination has been cited for several years by the UNL Commission on the Status of Women. Further, the suit says, NU Law Dean Richard Moberly has called Potuto's situation a compelling example of gender pay disparity in the law school. ...

The NU system lists Potuto's salary as $229,460, compared with long-serving law colleagues Robert Denicola's $273,653 and Martin Gardner's $256,755. Neary said Potuto has no problem with her male colleagues' compensation, but she wants equal pay.

Those figures include "endowed chairs" for all three (endowed chairs honor  distinguished faculty members and are added to base pay) and Potuto's $5,500 per year as faculty athletics representative.

Why is Nebraska paying anyone this amount?