In Defense Of American Excellence 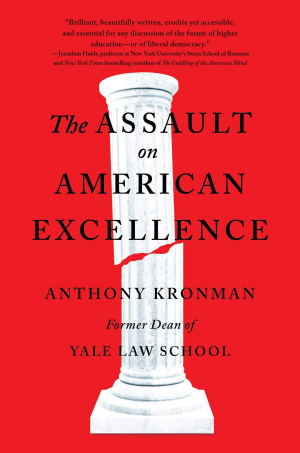 While Anthony Kronman’s The Assault on American Excellence certainly has many rich veins to mine, this Review aims to tap only those central to his observations on how academic excellence has gradually lost its reign in colleges and universities. Part I situates the Book among his earlier scholarship and other scholars’ work. To better understand his vantage point, Part II contextualizes the Book with Kronman’s intellectual journey and the historical-to-current views on diversity. Part III discusses the Book in detail, beginning with Kronman’s argument for the pursuit of excellence followed by his identification of the three anti-excellence movements, and critically engages the Book with arguments/counterarguments that it could have, should have, but did not cover. Part IV briefly concludes with an ex ante view on the future of excellence. ...

Conclusion.  While this short Review does not do enough justice to the Book, which is excellent and worth reading in its entirety, I venture to leave some brief thoughts. “‘The true question to ask respecting a book is, Has it helped any human Soul?’” Kronman’s Book certainly has eased mine and possibly the souls of those who still believe in intellectual diversity and the pursuit of excellence. It may even help save the lost souls who are still perplexed about the increasingly aggressive intrusion of politics to higher education to better understand and formulate their stands on this issue.

In addition to Kronman’s professed belief that has remained constant throughout his academic career, the known constant in life is change. For example, the foundation of all progress depends on change. It is undoubtedly common in higher education; indeed, “[i]f Sisyphus were a scholar, his field would be education.” Even the purpose of colleges and universities has changed. Yesterday’s pursuit of excellence has become today’s pursuit of egalitarianism. To extrapolate, perhaps today’s minority—whose membership includes Kronman—that still fiercely defends intellectual diversity may become tomorrow’s majority again. For instance, Justice O’Connor in Grutter v. Bollinger expected no further use of racial preferences in affirmative action programs by 2028.