Chasing Rankings Is Starting To Strain Some Elite Universities

Chronicle of Higher Education, How Chasing Prestige Is Starting to Strain Some Elite Institutions:

The pressure to maintain elite status is starting to be reflected in the finances of some of the nation’s pre-eminent private research institutions.

Last month Northwestern University became the latest such institution to have its bond rating lowered by Moody’s Investors Service, the financial-information company. Moody’s cut the university’s rating of nearly $2.2 billion in debt, from its top grade of Aaa to Aa1, its second-highest score.

As Moody’s noted, the “pressure to invest to sustain competitiveness with other elite universities will be challenging.” ...

Northwestern is generating smaller gains from its operations than it did in previous years, Moody’s found. While tuition revenue has remained stable, Northwestern’s expenses across nearly every category have grown significantly. Of particular concern to the analysts was the university’s debt load. It tripled between the 2011 and 2018 fiscal years, from $775 million to $2.555 billion. For every dollar Northwestern earned from operations in 2014, the institution was liable for $2.60 in debt. Four years later, that ratio had ballooned to $18.10 in debt for every $1, according to Moody’s calculations. 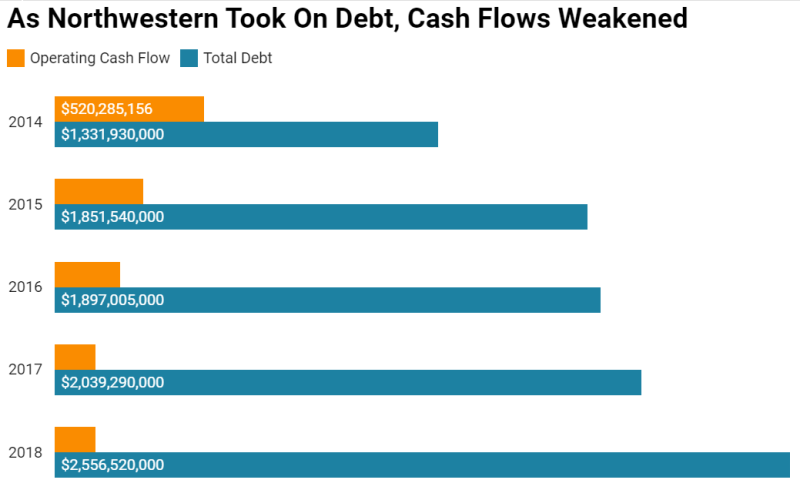 Some of the language that appeared in Moody’s report on Northwestern has also cropped up in the analyses prepared for similar elite private research institutions [Boston University, Case Western, Washington University].

Not just the elites: I have long wondered about just how long Suffolk and Emerson can keep up their pretenses. Suffolk's troubles have been fairly well reported of late - revolving door of presidents, outstanding debt more than twice its endowment, bonds rated just above junk status, mass offers of professorial buyouts, the law school dropping the median LSAT 10 points (156 to 146) to keep enrollment up, etc. Emerson, meanwhile, has dropped something like $610 million in recent years to buy numerous Boston theaters and build a campus in LA, against a backdrop of barely a $160 million endowment.