George Farkas (UC-Irvine), Discrepancies By Race and Gender in Attorney Discipline By the State Bar of California: An Empirical Analysis:

These discipline differences between White male attorneys and male attorneys of color have two components. One is the distribution of the number of complaints that a gender/race group was subject to, and the other is the rate at which attorneys in a particular gender/race group and with a given number of complaints were disciplined. Complaints come to the Bar prior to their investigation, so that only the discipline rates applied to these complaints are attributable to actions of Bar staff. Further, Black and Hispanic attorneys averaged greater numbers of complaints than White attorneys. Accordingly, we undertook simulations to estimate the probation and disbarment/resignation rates that would have been experienced by Black and Hispanic attorneys if their distribution of complaints had been the same as those of White attorneys.

The result of these simulations was to greatly reduce the size of the gender/race group disparities in discipline. For Black males, the group with the largest differences from Whites, the probation rate declined from 3.2% to 1.4% and the disbarment/resignation rate declined from 3.9% to 1.6%. These simulated rates for Black males were only about ½ of a percentage point higher than the rates for White males. Similar results were found for Black females and for Hispanics. 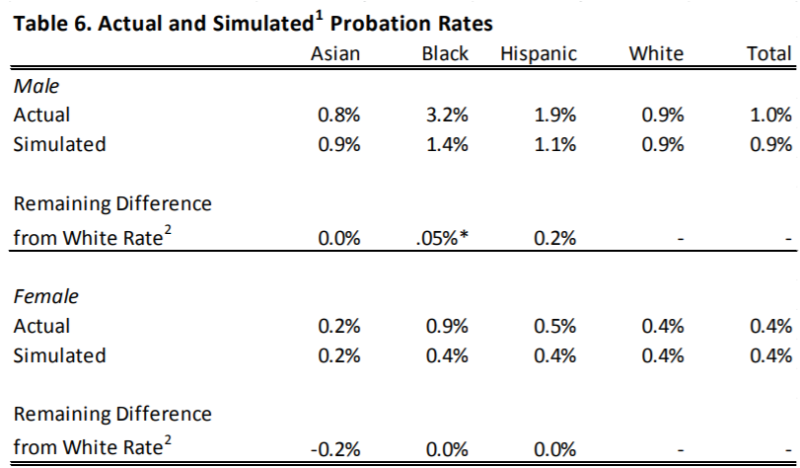 Black male lawyers in California are more likely than other attorneys to be subjected to discipline by the State Bar, and far more likely to be the targets of complaints to the bar by their clients, according to a study commissioned by the bar.

The study by George Farkas, a professor of education at UC Irvine, said one likely reason for the disparities in discipline is that African American attorneys are more likely to represent themselves in proceedings before the bar. Black attorneys also face more disciplinary investigations, and are impacted by a system that increases punishment for repeated offenses, the report said. ...

Taking the differences in complaints into account, Farkas reported, the bar disbarred black male attorneys about 1.6 times as often as white males in the cases it reviewed during the period, and about 1.8 times as often as Latinos. Disbarment rates for black women were only slightly higher than they were for white women and Latinas. ...

In response to the study, the bar said it would hire a consultant on “bias-free decision-making” to review its practice of considering a lawyer’s past disciplinary record when imposing punishment, and to recommend measures “to address any unintended bias in the discipline system.”

Black male attorneys are more likely to be disciplined than their white male counterparts, according to a new report released by the State Bar of California.

The study examined “probations, disbarments, and discipline-related resignations for the last 28 years for approximately 116,000 attorneys admitted between 1990 and 2009,” according to a statement from the State Bar.

This presented a quandary for the study, because most of those complaints came from members of the public.

The results almost certainly aren’t as pronounced outside of litigation and outside of criminal defense work.

Maybe break this down by areas of practice? Since we know some areas of law are more likely to generate client complaints than others. And those might lead to disciplinary action?

Curious that they control for the number of complaints as a mechanism for identifying bias attributable to the Bar overseers, but they don't appear to control for the nature of the violations that are alleged. Could it be that more severe violations are giving rise to more severe consequences? That might explain the very minimal difference that remains once accounting for frequency of allegations.

I don't understand how this could be racism. Racists wouldn't hire a black attorney in the first place.

Let’s all continue pretending we didn’t know about this, that we can’t explain it, and that it must be due to racism. I like playing this game. It’s lots of fun and doesn’t affect me. So whatever.

I don’t suppose the disparity could come from actual (not merely perceived or reported) differences in attorney behaviour? Like actual differences in behaviour in school disciplinary reports. Nah - must be bias up and down the line.