Harvard Law School is in the midst of a search for a new shield, having retired the previous one in 2016 due to the Royall family’s involvement with slavery. While Dean Manning has assured Student Government that the working group tasked with selecting the new shield is making steady progress, its operations have generally been opaque. To remind the school that the search for a new shield is indeed underway and to inject some much-needed life into the discussion of what symbol we ought to pick to represent ourselves, I’ve taken the liberty of suggesting a few designs that seem fitting. 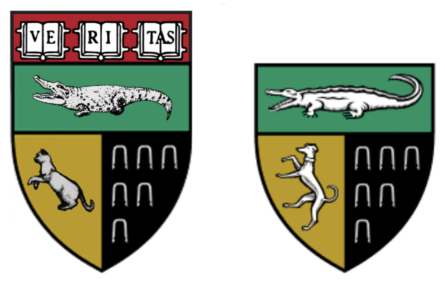 At first glance this [left] might appear to be nothing more than a shameless rip-off of the YLS shield [right]. But that is far from true. Because merely ripping off our rival’s shield would be the kind of pettiness that the noble students of HLS are supposed to be above. It would be unoriginal. It would be sophomoric. It would be precisely the kind of conduct that one would expect of a YLS student.

Why don't they take the flag down as well since slaves were imported under it, also

I'm warming to just putting the face of "Big Brother," surrounded by snowflakes, on the shield along with the motto "Falsum sit verum" (Truth is false) or, alternatively, "Quid est veritas?" (What is truth?).

First world law school problems: while the rest of the proles at the "Bottom 195" law schools worry about how to eat after graduation, Harvard Law School students worry about their family crests, I mean school shield. I mean they are really making the metaphor of elite pedigrees as modern-day heraldry too on the nose now.