WSJ: Trying To Control Your Heirs’ Behavior From The Grave Often Backfires 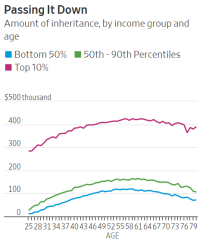 It’s hard enough to influence people’s behavior when you’re alive. After you’re dead? You may be inviting trouble.

Death is inevitable, but life can be unpredictable. And that’s a key reason why many estate-planning advisers discourage so-called dead-hand control.

Dead-hand control describes a situation where people try to control their heirs’ behavior from the grave. It typically involves incentive wills and conditional trusts that tie inheritance or trust disbursements to beneficiaries achieving certain goals. They can include things like graduating from college and taking a certain career path; staying sober or marrying within the family’s faith.

Bobbi Bierhals, a partner at law firm McDermott Will & Emery LLP, had a client whose trust would pay for graduate-level education but “law school will not be paid for because that’s not useful.”

Another said the beneficiary could be a member of a band or an artist—but only a commercially successful one. If he or she weren’t successful, the trust distribution wouldn’t be forthcoming.

But the experiences of estate planners and beneficiaries who have lived with such stipulations suggest that they can easily backfire. The lack of trust implicit in rigid demands on descendants’ behavior can sow resentment, lead to family breaks and even long legal battles.

“It really can hurt a family’s dynamic where a beneficiary is expected to act a certain way, or select a certain school, or marry into a certain religious tradition when that’s not really their life choice,” says Donna Trammell, director of family wealth stewardship at Bessemer Trust. “It also doesn’t allow them to differentiate from the family. It can be more of an opportunity for them to try and game the system.” ...

“The problem with [incentive trusts] is that life is so unpredictable, and you’ll be dead,” says Liza Hanks, an estate-planning lawyer in San Francisco. “It’s important to remember maybe the best time to teach and empower your children is when you’re alive.”

More proof that the angst about inherited wealth and the need for estate taxes is overblown. The third generation usually blows the family wealth anyway.